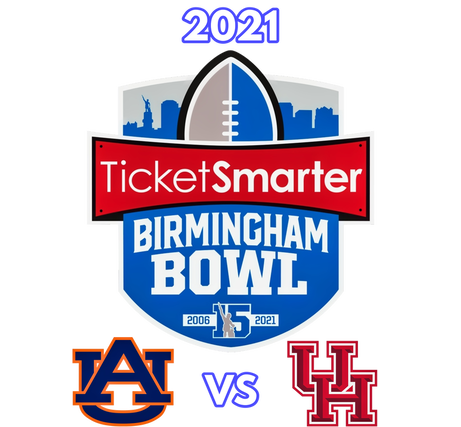 Who’s ready for some Power 5 vs Group of 5 action, yo?

The Houston Cougars rattled off 11 consecutive wins after a season-opening loss to Texas Tech and were the runner up in a tough AAC (Cincinnati). They’ve been really good all year and get a chance to take on a name school from the mighty SEC. Auburn has been a yuuuuge disappointment this season (6-6) but don’t forget that they almost took down ROLL TIDE (L 24-22 OT), a game in which they had a projected win probability of 102% at one point **.

Bo Nix season is no longer in FULL EFFECT as he has taken his talents to Oregon. That leaves backup QB TJ Finley (5-1 TD to INT, 56%) at the controls and he was the man that almost led them to the win over ROLL TIDE. He averaged less than 6 YPA in starts vs South Carolina and Alabama so it’s gonna be tough sledding vs a Houston pass D that’s one of the best in the nation (#18 pass efficiency D, 56%, 17-14 TD to INT). They’ll be without ace CB M Jones but should still provide a stern challenge for the Auburn THROW GAME. Auburn’s fine 1-2 RB punch of T Bigsby and J Hunter are both still playing as far as we know (combined 1579 rush yards, 13 TD) but Houston has also proven to be a tough nut to crack on the ground (#11 FBS run D). Houston is also adept at ACHIEVING PENETRATION (42 sacks, T4 FBS). Auburn has allowed 22 sacks in 12G (#6 SEC). Fun fact – Houston is #1 (!) in the FBS in 3rd down D (25.6%).

The RB duo of A McCaskill and T Henry have combined for over 1400 yards and 23 TDs on the ground but they do most of their work thru the air (#83 FBS rush offense, #24 pass). QB C Tune does good work (28-9 TD to INT, 8.6 YPA) and seven doods have accumulated 150+ receiving yards. WR N Dell is a particularly lethal weapon (80, 1179, 12 TD) and note that Auburn will be without star CB R McCreary. The Tigers will also be missing quite a few depth guys as well as leading tackler Z McClain. Auburn has been decent vs the run (#33 FBS) but mediocre vs the pass (#80 pass efficiency D). They did hold ROLL TIDE to 48% completions and got some heat on the QB so maybe there’s hope? It’s just hard to know what to expect with a few key doods missing.

Houston HC Dana Holgorsen has lost four straight bowl games (2-6 overall) and the Cougars last tasted bowl victory in 2015 when they took down Florida St in the Peach Bowl (W 38-24)…..Auburn has dropped their last two bowl games….HC Bryan Harsin is 3-2 in bowl action…..The Tigers played the #2 schedule according to Sagarin…..Houston #111.

The Cougars are a very balanced team and are almost certainly the more motivated bunch.