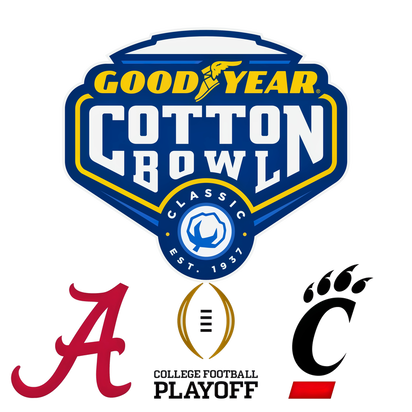 The Cincinnati Bearcats are the only undefeated team in college football and represent the first Group of Five team to make the CFP. They didn’t play the toughest schedule (#77 Sagarin) but took care of their best opponents relatively easily (Houston, SMU, Notre Dame). ROLL TIDE fell to Texas A&M around the midpoint of the campaign and they cobbled their way through the remainder of the docket to win the SEC West. They pulled a quasi-miracle comeback vs Auburn in the Iron Bowl and they smoked the mighty Georgia Bulldogs in the SEC Championship Game.

It all starts with YOUR Heisman Trophy winner QB B Young who’s been outstanding in year one as the ROLL TIDE starter (68%, 43-4 TD to INT). The THROW GAME ripped Georgia (and many others) to shreds but they’ll have to deal with the excellent Cincinnati pass defense (#1 FBS pass eff D, 10-18 TD to INT) in this one. And note that one of their 1000-yard WRs in out for this game (J Metchie). That dood was CLUTCH and will be missed. They still have one of the most explosive players in the nation in WR J Williams (1445, 21.3, 15 TD) but no other proven commodities at WR. They have a pair of decent receiving TEs but it just might be tough sledding thru the air. We expect a heavy dose of 1000-yd RB R Robinson who’s had time to heal up and he’s a BROKEN TACKLE MACHINE that should abuse the Cincinnati run D (#44) for stretches at a time. Auburn was able to get a lot of heat on Young but Georgia had no such luck. Alabama has allowed 35 sacks (#12 SEC) and the Bearcats are #2 in the AAC in sacks (37). Cincinnati has to respect the ability of Williams in the medium to deep range and we expect ROLL TIDE to be more focus on the run and short passes. 3rd down should be interesting as Alabama is #2 in that situation whilst Cincy is #20 on D.

The Bearcats have a balanced and efficient offense (#48 rush, #10 pass efficiency) led by star QB D Ridder who can beat you with his arm and his mobility (30-8 TD to INT, 6 rush TD). He struggles with accuracy at times but you can rarely have everything. Eight doods have 200+ receiving yards and the WR group is an underrated bunch led by future NFL draftee A Pierce (867, 8 TD). RB J Ford has rushed for well over 1200 yards and 19 (!) TDs and will have to get things going on early downs. ROLL TIDE is going to provide an immense challenge for the ground game as they are #4 in the country in run D (83 YPG) and the Cincinnati OL is probably the weakness (if there is one on this squad) that can be exploited. ROLL TIDE has allowed more than 110 rushing yards in just one game all year (Florida, mid-Sept, 244) and have allowed just 8 rushing TDs in 13G. Four of those came vs the Gators. They’re pretty average in the secondary (#66 pass eff D) but we’re not sure that Ridder can consistently MATRICULATE the ball down the field effectively, especially if the ground attack isn’t working well. Also note that Alabama has tallied 46 sacks (#3 FBS) and will provide the sternest test of the year for the Bearcats OL. They’ve done a decent job protecting the passer (20 sacks, #2 AAC) so this should be a fun battle to watch.

We expect a measured and physical approach from the ROLL TIDE offense and don’t expect Cincinnati to have much success on the ground. There’s also a good chance that Cincinnati leaves a few points on the field due to the kicking game. Don’t foresee a high-scoring affair.