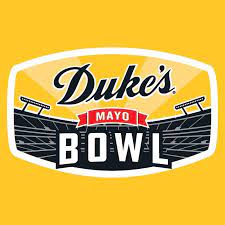 The Tar Heels were a disappointment this year as they had high hopes to make serious noise in the ACC. Sadly, they finished the regular season with a mark of 6-6 and finished with a loss to their hated rivals from NC State. The COCKS on the other hand exceeded pretty much everyone’s expectations in year one of the Shane Beamer experience. They also have a record of 6-6 but managed to beat Florida and Auburn along the way.

Star QB S Howell is gonna give it a whirl but he doesn’t have the eye-popping stats that he booked during the 2020 scamdemic season (23-9 TD to INT, 30-7 LY). It didn’t help to lose a lot of key talent from last year’s roster, and it certainly didn’t help that the OL was BRUTAL in pass blocking (45 sacks, #126 FBS). He’ll be able to hit some throws vs the South Carolina D and 1000-yard RB T Chandler appears to be a “go” as we approach press time. Howell is also a dangerous and TOUGH runner (825, 11 TD) and it’ll be interesting to see if the SC D can hold up. They’ve been pretty solid vs the pass but not so much vs the run (#97 FBS, 179 YPG). They’ll be missing ace pass rusher K Enagbare.

Grad assistant, head chef, part-time nurse, and astrophysicist ** Zeb Noland will get the start in this one and he’s been decent enough when pressed into duty in 2021 (56%, 6-1 TD to INT). It appears that he’ll have all his key THROW GAME weapons at his disposal including #1 WR J Vann (679, 5 TD) and a pair of solid TEs but note that #1 RB Z White has chosen to quit (583, 2 TD). There’s not much scary about this offense but the Tar Heels D is nothing to write home about either (#92 run D, #92 pass eff D) so it’s not unthinkable that the COCKS could have some success.

UNC HC Mack Brown is 15-9 in bowl games and 1-1 during this REBOOT as the head man in Chapel Hill……The COCKS haven’t tasted bowl victory since the 2017 Outback Bowl when they took down Michigan (W 26-19).

It’s hard to trust a team this flaky laying close to double digits but they just have more talent. South Carolina will show up and play like their hair is on fire but will need help in the turnover department (+2 or better) to keep this one close. Probably.