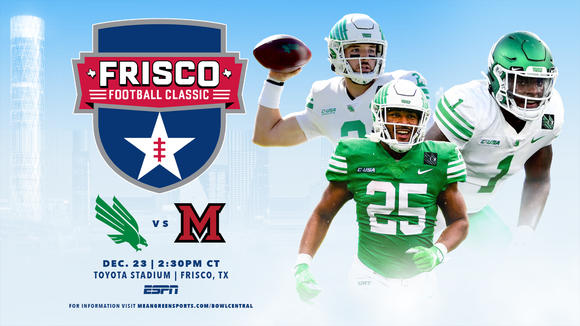 The Mean Green lost SIX (!) consecutive games after an opening win over FCS foe Northwestern St but kept fighting and rattled off FIVE (!) wins in a row to achieve bowl eligibility. Those wins included an impressive 45-23 win over the C-USA champs from UTSA. Miami cobbled together six wins and were a one-point OT loss away from making the MAC Championship Game.

The holidays aren’t the HOLIDAYS without the Frisco Football Classic, yo. Let’s do ittttttt.

The Redhawks have the #1 passing offense in the MAC and a really good QB in B Gabbert (24-6 TD to INT, 58%, 9.0) who should have a good day vs a porous North Texas pass defense (#98 FBS pass efficiency D, 23-6 TD to INT). Gabbert is an efficient dood who doesn’t make mistakes and North Texas hasn’t come up with many picks this year. Miami doesn’t do much on the ground and the North Texas run D has been better than expected. The Mean Green have a sneaky-good pass rush (34 sacks, #3 MAC) and will have to find a way to get some pressure on Gabbert. The Redhawks have allowed a mere 17 sacks in 12G.

Don’t look now but North Texas has one of the most devastating rushing attacks in college football (#3 FBS, 246 YPG) that’s rumbled for 320+ yards in 3L4G. They’ve rushed for 30 TDs and boast a lethal RB room including D Torrey who’s rushed for 1215 yards and 13 TDs. Miami Ohio has been pretty decent vs the run (#3 MAC run D, 151 YPG) and shouldn’t be a push over in this one. They did give up over 300 yards to an excellent Kent St rushing attack in their season finale so there’s definitely reason for optimism if you are on the Mean Green side. The North Texas THROW GAME doesn’t do much but WR R Burns has booked 715 yards (4 TD) and TE J Pirtle has 38 receptions. QB A Aune has decent mobility but is an inconsistent passer (52#, 9-7 TD to INT).

The Mean Green are 0-4 (!) under HC Seth Littrell in bowl games….They’ve lost the last three in HORRIFIC fashion…..50-30, 52-13, 56-28……Miami Ohio is 7-5 all-time in bowl action but haven’t tasted victory since the 2010 GoDaddy.com bowl…..North Texas should theoretically have a home-field edge as it’s about a 36 minute drive from their campus to Frisco.

We think there’s a bit of value in the dog but think the optimal play is the ‘over’. Both teams should have success DOING what they DO.