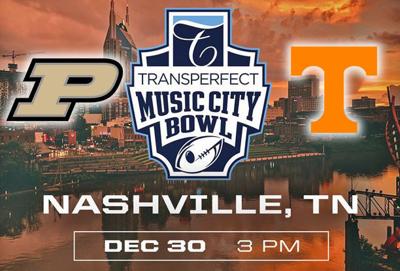 It’s time for some SWEET Big Ten vs SEC action as Purdue battles Tennessee in the Music City Bowl. The Volunteers made nice strides in year one of the Josh Heupel experience and won eight games during the regular season after winning just three games during the 2020 plandemic campaign. Purdue also struts into Nashville with a mark of 8-4 and have already had their best season under Jeff Brohm after he took over in 2017. This could be one of the more entertaining games of the bowl season.

The Vols have been incredibly explosive with QB H Hooker at the controls (#15 total offense, #19 rush, #7 pass efficiency) and have managed to put up a lot of points despite being #130 in the nation in time of possession. The score a lot, and they score QUICKLY. Hooker has an awesome 26-3 TD to INT ratio and he’s averaging an impossible 9.8 YPA. He’s got excellent mobility as well (561, 5 TD) and it appears as tho all of the key weapons at RB and in the THROW GAME are gonna give it a go in this one. The lone exception is #3 rusher T Evans. Purdue has been average vs the run (#60 FBS) and pretty decent vs the pass (#31 pass eff D) but note that they’ll be playing without star pass rusher DE G Karlaftis. And we can’t forget how Ohio St ripped them for 45 points in one half and could have scored 320 in the game if they wanted to **.

BOILER UP has one of the most one-dimensional offenses in the country (#127 rush, #8 pass) but QB A O’Connell has really been solid over the last five games posting a ridiculous 16-0 TD to INT. They’ll be without superstar WR D Bell (which really stinks) (93, 1286, 6 TD) and the next time we’ll get to see him play will be on Sundays. The good news is that they still have a fine set of WEAPONRY at WR and TE and eight doods have talled 100+ receiving yards. Tennessee has been decent vs the pass (#49 FBS pass eff D) but haven’t been great on 3rd downs (#103). Purdue doesn’t stretch the field all that well (10.7 YPC) but the short passing game could do some damage and keep the Vols D on the field. O’Connell has the mobility of a GLACIER which could be problematic but Tennessee is mediocre when it comes to sacking the QB (#8 SEC sacks, #8).

Tennessee has won four straight bowl games and HC Josh Heupel is 1-2 SU in his career in bowl action….Purdue HC Jeff Brohm is 3-1 in the postseason (1-1 with BOILER UP)…..Purdue’s last bowl appearance was a 63-14 beating at the hands of Auburn in the 2018 Music City Bowl…..IF you believe in QUASI-HOME FIELD advantage recall that this bad boy is being held in Nashville, TN.

Tennessee can score points in bunches and we expect them to do some damage in this one. The line has adjusted to the fact that Purdue will be without their best offensive and best defensive players but has it moved enough? We’ll call for a 7+ point win for the favorite.