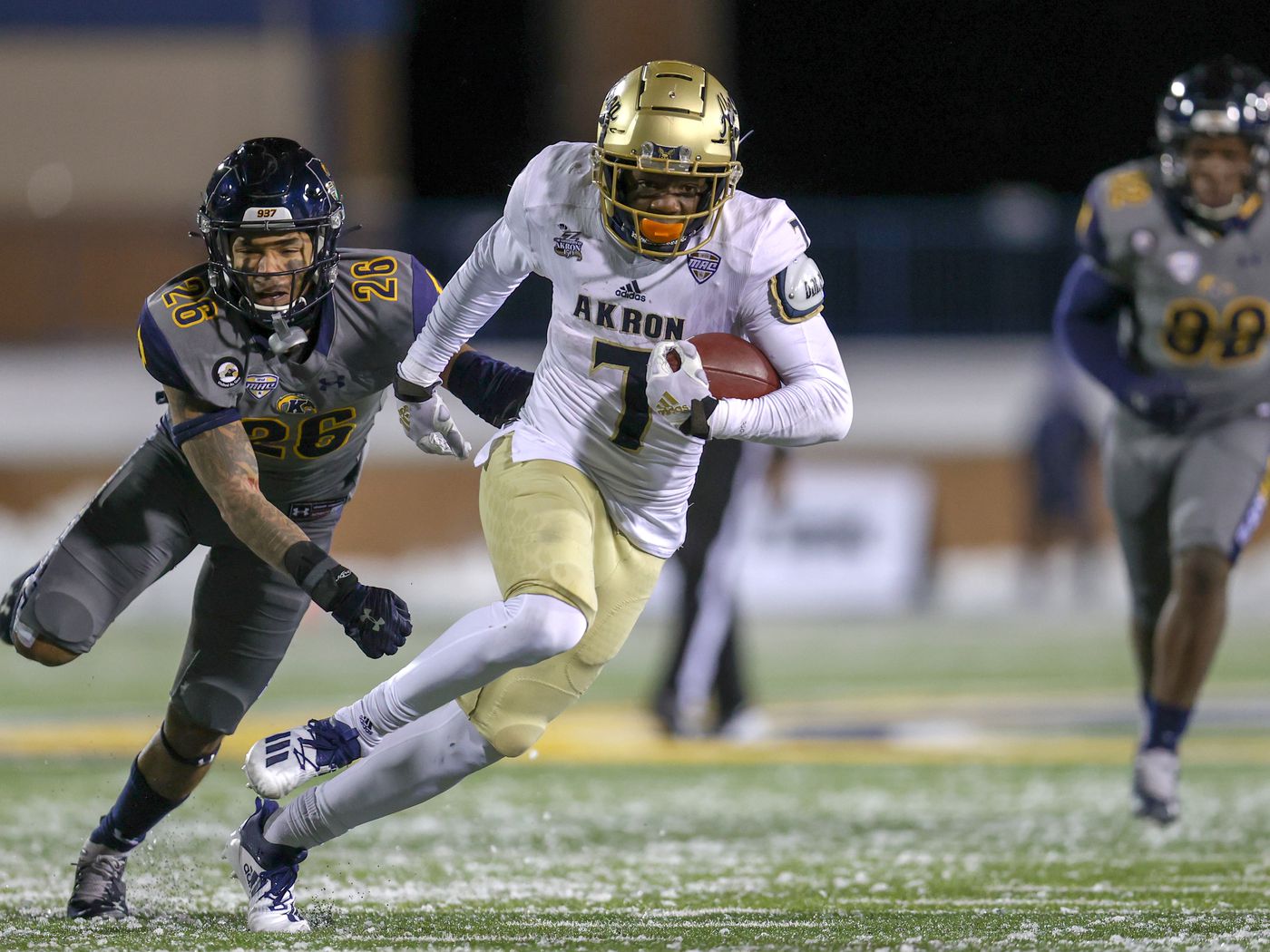 The Zips broke a 21-game losing streak when they manhandled Bowling Green (W 31-3) near the end of the regular season. They also showed some life in their road game at Ohio (L 24-10) and managed to score 35 points against Kent St. There’s still a long way to go for this program to get competitive BUT there are some GREEN SHOOTS popping up. What can we expect in 2021?

The Zips were pretty pathetic on offense once again LY (#121 FBS total offense, #84 rushing, #119 passing) BUT the good news is that they have an emerging star at RB in ALL-MEGALOCKS team member Teon Dollard (666, 5.9, 6 TD) who is an excellent piece to build around. They could obviously use a LOT more production at QB and they get back LY’s starter Zach Gibson (58%, 4-5 TD to INT) as well as Kato Nelson who has a 34-16 TD to INT ratio in his career with Akron (dnp LY). Six of the top seven pass catchers are back but it remains to be seen what kind of talent they have to try and get the THROW GAME rolling. Five starters return up front and while they did a decent job assisting the ground game, they were LAST in the MAC in sacks/game allowed LY. The good news is that the big boys are young but relatively experienced given the game action they saw in 2020. They won’t be explosive but we’ll call for their first season averaging 20+ PPG since 2017 (22.1).

There’s a lot of work to do with a stop unit that allowed 50+ points in three of six games LY (41 PPG, #123 FBS scoring defense). They allowed 248Y per game on the ground and yielded a disgusting 67% completions. We worry a lot about the talent on the DL but will note that they bagged 9 sacks (6g) after needing an entire season in 2019 to tally 10. Adding Florida St transfer Curtis Fann up front won’t hurt. Everyone of consequence is back at LB including Bubba Arslanian who led the team in tackles LY whilst bagging 3 sacks (T1 team) in his spare time. Akron needs to get better on the back end after finishing in the bottom two of the conference in pass efficiency in each of the last two seasons (35-7 TD to INT). There’s a pair of good ones to build around in the secondary including CB AJ Watts (#2 tackler, 2 INT). This is still one of the weaker defenses in the MAC but we expect noticeable improvement.

Overall – IRON MAIDEN was famous for telling you to BRING YOUR DAUGHTER TO THE SLAUGHTER. In light of that, it’s interesting to note that Akron faces Auburn and Ohio St on the road before MACtion begins. They have a BRUTAL draw from the West (Ball St, Western Michigan, Toledo).

Ya, the Falcons are going to stink, but this is a winnable game for them and they’d love to avenge last year’s loss. Also note that the great PHIL STEELE tells us Akron hasn’t won two straight over Bowling Green since 2006.

Assuming they manage to take down something called Bryant, they’d still need to win two more games to hit the ‘over’. Losing to Bowling Green would make that REALLY tough.

In 1926, the athletic teams were named the Zippers, after rubber boots manufactured by the B.F. Goodrich Company, which was headquartered in Akron at the time.

Things appear to be moving in the right direction and this year’s team looks much better on paper than last year’s edition. The issue? The schedule doesn’t do them any favors and it feels like they’ll struggle to bag more than a couple of wins. They could, however, be a sneaky team when it comes to beating the point-spread. Not saying, just saying.