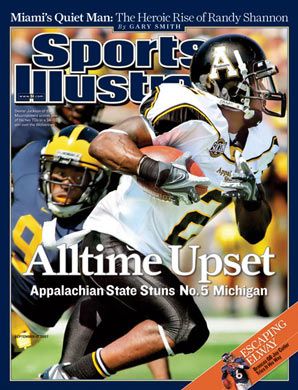 The machine keeps rolling along.

The Mountaineers made a valiant attempt to SHOCK THE WORLD in their season opener as they took Penn St to overtime (L 45-38). They cruised the rest of the way with the only misstep being a 20-point (!) beatdown at the hands of Georgia Southern. Appalachian St started a bit slow but managed to take care of business in the inaugural Sun Belt Championship Game defeating the Ragin’ Cajuns by a score of 30-19.

The Mountaineers carved through the Sun Belt like a TREMENDOUS MACHINE and finished with the #1 scoring offense (37.3 PPG) and #2 total offense (431 YPG) in the conference. QB Zac Thomas was named the Sun Belt Offensive POY and did some fine working passing (2,039, 21-6 TD to INT, 63%) and rushing (504, 10 TD). Thomas is back for duty and has an embarrassment of riches at his disposal. Corey Sutton might be the most dangerous receiver in the Sun Belt (44-773, 17.6, 10 TD) and the WR and TE groups return essentially intact. The Mountaineers are STACKED at RB with the 1-2 punch of Darrynton Evans (1,187, 6.6, 7 TD) who bagged 1st Team Sun Belt honors and Marcus Williams. Remember that defenses must also account for the crafty running ability of Thomas. It can’t possibly get any better? AMIRITE? Oh, it does. Appalachian St returns four starters to the best OL in the conference that paved the way for 5.8 YPC (#1 Sun Belt) whilst allowing a paltry 18 sacks (also, #1 Sun Belt) a season ago.

This looks like the best offense in the conference and they should finish with a similar level of production as the prior year (37.3 PPG).

The Mountaineers played spectacular defense in 2018 allowing just 15.5 PPG (#4 FBS). That marked the 3rd time in the past four years that these guys have allowed fewer than 20 PPG (2017 – 20.2). Veteran DC Ted Roof takes over the defense and has six returning starters on board. It has the makings of another strong stop unit. The DL has a lot of experience but will definitely miss 1st Team Sun Belt NT MyQuon Stout. The LB corps is probably the best in the conference and they return #1 tackler Akeem Davis Gaither who achieved 1st Team Sun Belt recognition a season ago. The secondary was a HOUSE OF HORRORS for opposing QBs last year as the Mountaineers allowed the fewest TD passes in the FBS (8) (tied with Mississippi St) whilst collecting 17 INTs. The biggest concern on defense is the need to replace their excellent CB combo. It will help to have 1st Team Sun Belt performer Desmond Franklin back at FS.

This appears to be the best defense in the Sun Belt but we expect them to be down a slight notch and closer to the 20 PPG allowed mark (15.5 LY).

The Mountaineers were excellent in this department last year and almost everyone is back for battle. They boast a rock solid P,PK combo and KR Darrynton Evans averaged well over 30 yards a pop on 15 KO returns in 2018. They will to find a replacement for Clifton Duck who was a dangerous PR.

Overall – It looks pretty easy. The Mountaineers are the class of the conference on paper. Their toughest tests should come in road games at South Carolina and Troy.

Potential ATS Trouble Spot – Nothing noted as we go to press.

Lean to the ‘over’. They are the class of the conference and we can’t see them losing four games.

Appalachian St is 21-3 in their last 24 conference games.

You don’t wanna meet these dudes in a bowl game, yo. They are 4-0 all time and have won the last pair by a combined score of 79-13.

Legendary HC Mack Brown coached Appalachian St to a record of 6-5 in 1983.

This is a comically-talented team that is the clear-cut favorite to win the Sun Belt. It remains to be seen if new HC Eliah Drinkwitz can have the same success as former HC Scott Satterfield (Louisville), but we like his chances to get off to a good start this year.

This is a tough team to back from an ATS perspective as it’s well known in DEGENERATE circles that this is a great football program. They will be laying big numbers a lot this year. The best place to pick your spots might be on the road where they are a respectable 20-14-1 ATS (58.8%) L10Y.