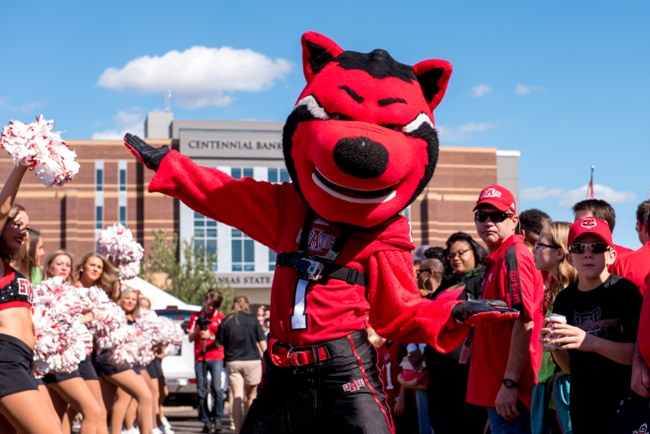 The Red Wolves started out well (3-2) and managed to SHOCK the WORLD at Kansas St when they upended the Wildcats by a score of 35-31. They struggled in the 2nd half of the year and dropped five straight contests before taking down hapless ULM in the season finale (W 48-15). The Red Wolves move forward with an interesting hire in Butch Jones who has previously coached at Central Michigan, Cincinnati, and Tennessee.

The Red Wolves moved like a TREMENDOUS MACHINE with the THROW GAME and finished the year ranked #2 (!) in the FBS in passing offense (364 YPG) and an impressive #17 in passing efficiency. Logan Bonner and Layne Hatcher combined for a great 39-9 TD to INT mark LY but Bonner moves on (Utah St). Hatcher loses two of his top-three targets including star Jonathan Adams who had an amazing campaign (1,111, 14.1, 12 TD) and garnered 2nd Team AA honors. There’s still reason for optimism given the emergence of Dahu Green (32-542, 5 TD LY) and Corey Rucker (28.3 YPC) (!) and they add a few interesting transfers into the mix. #1 RB Jamal Jones is gone but Marcel Murray and Lincoln Pare should provide a good 1-2 punch, and they also add transfers in the RB room that make the depth look pretty good. Four starters return up front and they boast impressive size and a lot of experience. This offense will still be potent, and note that Keith Heckendorf remains on staff as the OC.

After three consecutive seasons of playing solid defense the Red Wolves have been brutal over the past two campaigns yielding an average of 35.7 PPG and 474 YPG. The passing defense has been particularly stinky. New DC Rob Harley will have his hands full as they move forward without star LB Justin Rice who led the team in tackles LY whilst booking an impressive 18.5 TFL, as well as stud DL Forrest Merrill (6.5 TFL). The DL still has a few good pieces in DE TW Ayers (6.5 TFL LY) and DT Terry Hampton (6 TFL) and they add a small handful of interesting transfers to the group. It remains to be seen how good the LB corps will be but is certainly can’t get better with the loss of one of the team’s best players in Justin Rice. The secondary was horrific LY but all of the key starting pieces are back. Note the addition of former ROLL TIDE CB SCOOBY Carter. This still looks like one of the weaker defenses in the Sun Belt.

They’ll have continuity in the kicking game. P Ryan Hanson was MEH LY (37.0 net) and PK Blake Grupe made but 11-18 FGA LY. They need to find new primary return men.

Overall – The non-conference schedule gets nasty after the opening FREE SQUARE vs Central Arkansas (Memphis, at Washington, at Tulsa). They draw both Coastal Carolina and Appalachian St from the East but at least both of those games are at home.

They’ll be coming back from a PAC 12 date (Washington) and note that FUN BELT action is on deck.

The program has proven winning pedigree and would nibble at any number ‘over’ 4.5. Otherwise it’s a pass, yo.

Butch Jones is the latest in a number of high-profile (and successful) HCs that have taken the job in Jonesboro (Blake Anderson, Bryan Harsin, Gus Malzahn, Hugh Freeze).

This should be an entertaining team. Points O’PLENTY no matter who has the ball. Butch Jones should provide some life and the offense looks SPICY. The defense? YEESH. There’s still gonna be problems. We look for improved performance and a decent shot to get back to a bowl game.