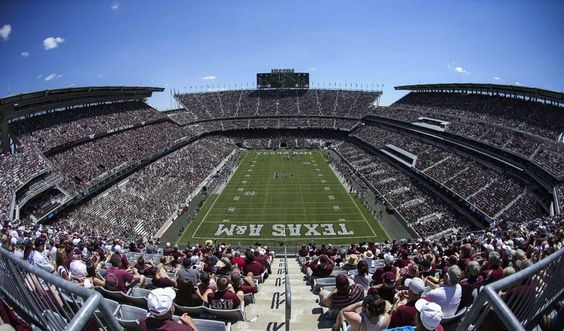 This just might be the biggest game of the weekend as Auburn travels to Texas A&M to battle the Aggies. The Tigers have played a really tough schedule and have only lost to the mighty Georgia Bulldogs and on the road at Penn St. Texas A&M is starting to look like WHO WE THOUGHT THEY WERE and don’t forget that they boast a win over ROLL TIDE.

After scoring just 10,22 in their first two SEC games the Aggies have started to get a bit more dangerous on offense. They’ve put up 41,35,44 in their L3G, and despite that two of those games were vs SCRUBS (Mizz, SC) there’s no doubt that we’re witnessing improvement right before our eyes. Eight players have 100+ receiving yards including star TE J Wydermyer and they boast a deadly 1-2 combo at RB of I Spiller and D Achane who’ve combined for 1,369 yards and 10 TDs. Both men average 6+ YPC. The Auburn D is good but not great across the board (#5 SEC run D, #8 pass eff D, #5 sacks per game) and have allowed 19,34,23,20 L4G. One thing to note…..Auburn has allowed 200 rushing yards in 2L3G and Texas A&M has rushed for 283,290 L2G.

Bo Nix season continues to be in FULL EFFECT as we approach press time. The stats aren’t eye-popping (9-2 TD to INT, 4 rush TD) but Nix has a way of making things happen with his mobility and he’s proven himself very capable of playing well on the road. They also have an excellent RB duo (Bigsby/Hunter) that’s rushed for 1,196 yards and 10 TDs. Four different players have 20+ receptions but they’re not overly explosive in the THROW GAME. Texas A&M has the #2 D in the SEC in terms of YPP and will be tough to run on but they’re not the same BRICK WALL as LY. The Aggies are #3 in the SEC in sacks/game but Auburn has done a good job of keeping Nix clean and he’s pretty much impossible to bring down in the backfield.

Per the intrepid Marc Lawrence…..The Aggies are 2-16 ATS L18 when playing off a regular season bye…..Bo Nix took down Texas A&M back in 2019 (W 28-20) as a 909 STAR MEGALOCKS SUPER LATE PHONE RELEASE BOOKIE SMASHER LOCK.

It feels as though Texas A&M is playing their best football of the year and we don’t think they’ll lose another regular season game. Auburn isn’t CHOPPED LIVER at all but we’ll side with the rested home squad that should be able to outrush the opposition by a decent margin.