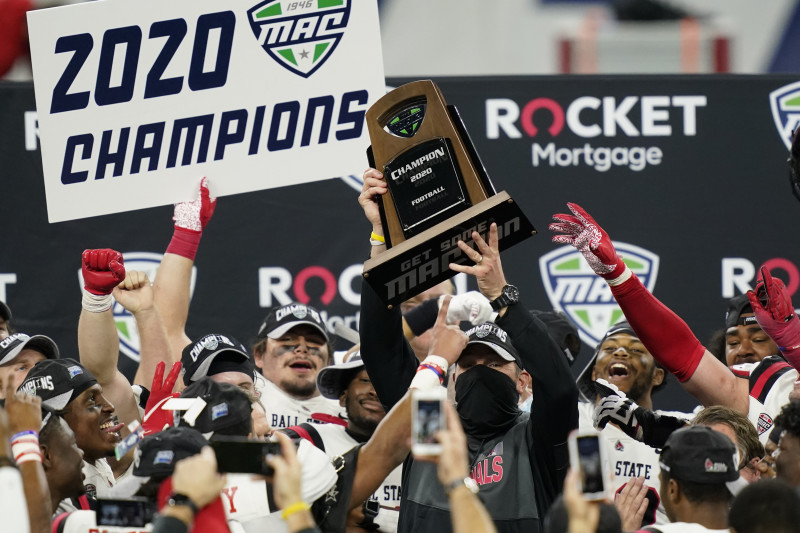 The Ball St Cardinals were MAC CHAMPS and it took a lot of CLOSE SHAVES in order to GIT ER DONE. They lost the opener to Miami Ohio (L 38-31) but didn’t lose again all year, and that included SHOCKING THE WORLD in the title game when they defeated the mighty Buffalo Bulls (W 38-28), as well as in the Arizona Bowl when they smoked a really good San Jose St squad (W 34-13).

Do they have the MINERALS to win this bad boy again? Let’s dig in.

The Cardinals have averaged 34.3 and 34.8 PPG the past 2Y and bring back their fine QB Drew Plitt to lead the attack once again (65.6%, 17-6 TD to INT, 8.6). Plitt has gotten better every year and there’s no reason to think that he won’t have a yuuuge year in 2021. Hopefully, he can stay healthy as there is no experienced depth behind him. The WR group is one of the best in the MAC with the return of the 1-2 combo of Justin Hall and Yo’Heinz Tyler who combined for over 1,200 yards and 12 TDs in 2020. Adding Cincinnati transfer WR Jayshon Jackson helps the cause. They’d like to get a bit more out of the ground game (#7 MAC rush, 3.9 YPC) but will move forward without #1 RB Caleb Huntley who missed a good chunk of 2020 and STILL rushed for 437Y and 6 TD (146 YPG). They’ll likely go with a committee approach at RB but note that they have some interesting youngsters that could emerge. Five starters return up front and they have experience and good size. Ideally, they’ll do a better job in pass protection as they allowed 28 sacks LY (#11 MAC sacks allowed per game).

The Cardinals finished #4 in the conference in rush defense LY, #5 in pass efficiency D, and led the MAC in INTs (10). Last year was the first time they’d allowed fewer than 30 PPG since 2014. Voila, MAC title. This year they return 16 of their top 17 tacklers and should prove to be one of the strongest stop units in the conference. They have decent size up front but could use a little more SPICE in terms of rushing the passer. Ball St is LOADED at LB and feature the team’s top-two tacklers from a season ago (Brandon Martin, Jaylin Thomas) as well as the team leader in sacks in Anthony Ekpe (5). As noted earlier, they picked off 10 passes LY to lead the MAC but hopefully they’ll get a bit more pressure on the QB in order to be as opportunistic in 2021. They booked 17 sacks in 2020 which ranked them #6 in the conference in sacks/game.

Overall – The non-conference slate is a bit nasty as they have to face Penn St (A), Wyoming (A) and Army (H). Their MAC road docket is very favorable as the only tough game (on paper) is the October date with Western Michigan.

It’s never easy to take on the Pokes at that high altitude and the Cards have a yuuuge game with Toledo on deck.

It’s a tough call at this number. They play in a tough division and the non-conference schedule doesn’t do them any favors.

Ball St is another legit contender in a deeeeep MAC West. They’re talented on both sides of the football but note that they’ve only booked one winning season since 2013. That was last year. They bounced back like CHAMPIONS last season after losing their opener and get full marks for that achievement. This year? They probably need to take down Toledo on September 25th if they want to win the division.