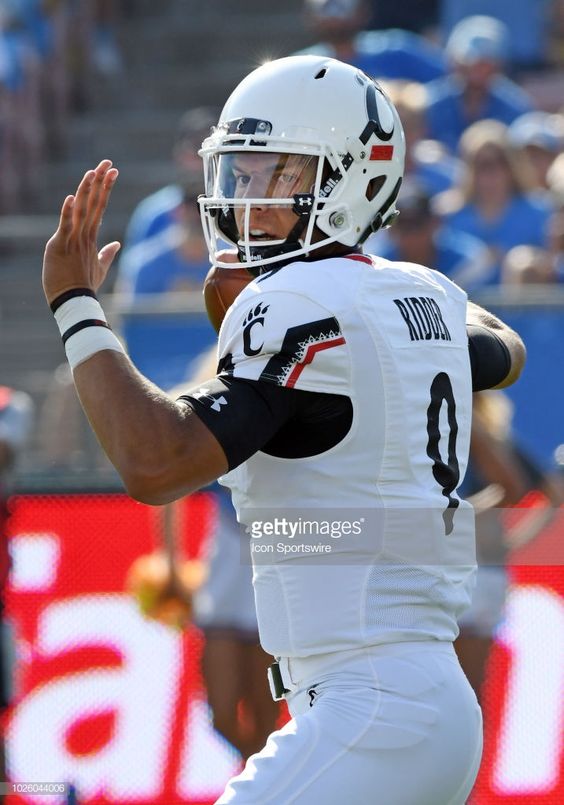 The Bearcats stormed out of the gate and rattled off six consecutive wins. It could have easily been a 10-0 (!!) start but they lost a tough one on the road to the Temple Owls. The only other team that managed to beat Cincinnati was the JUGGERNAUT UCF Knights who basically lose to nobody these days. An 11-win season was achieved after sliding past Virginia Tech in the Military Bowl (W 35-31).

The Bearcats enter the 2019 season with a solid roster and lots of confidence. Let’s go!

That was a nice surprise.

The Bearcats were a HOT MESS in 2017 and 2016 and averaged 20 PPG over the course of those two years. Enter redshirt freshman Desmond Ridder who played like a seasoned veteran whilst leading the Bearcats to a near-magical 11-win season. Ridder had a sparkling TD to INT ratio of 20-5 and rushed for almost 600 yards and 5 TDs in his spare time. Essentially the entire WR and TE group returns for duty outside of last year’s #1 WR Kahlil Lewis. It remains to be seen whether a true #1 can emerge from a deep WR corps but it will certainly help to have their excellent TE Josiah Deguara return for his senior campaign (468, 12.3 5 TD LY).

The Bearcats boast one of the best (and deepest) RB rooms in the conference and junior Michael Warren just might be the best back in the AAC (1,329, 5.4, 19 TDs; 25 receptions LY). The primary concern on offense is a front five that loses three starters including all-AAC center Garrett Campbell. The Cats also got some disappointing news when Michigan OL transfer James Hudson was not granted immediate eligibility. Shout-out to our AAC ELIGIBILITY INSIDERS for keeping us up-to-date right until press time.

Cincinnati is going to have a fine offense but might not reach the lofty heights of the 2018 team (34.9. PPG).

The Bearcats had one of the most impressive turnarounds of any defense in college football last year and allowed a mere 17.2 (!) PPG (#1 AAC) just one year removed from yielding 31.8 PPG. We were aware that HC Luke Fickell knew a thing or two about defense (Ohio St pedigree) but had no idea they could get THAT much better in one season.

Good news. Seven starters are back in the mix including three of last year’s top-four tacklers. The only worry on defense is a DL that loses a pair of all-AAC performers including an NFL DC (Cortez Broughton – Chargers), and returns just one starter. The LB unit will be solid with the return of 1st Team AAC member Perry Young and MLB Bryan Wright, and the secondary will be a legit NO FLY ZONE. They return four talented starters to the back-end of the defense, and don’t forget that the Bearcats had one of the best pass defenses in the FBS LY (#13 pass efficiency defense, 49%, 19-12 TD to INT).

This looks like the best defense in the AAC with the ability to be elite if they can reload effectively on the defensive line.

Let’s start with the REALLY good news. James Smith is one of the best punters in college football (AA LY) and he posted a ridiculous 44.3 yard net in 2018. PK Cole Smith was a TRAIN WRECK on FG attempts LY (5/12) but we may see Western Illinois grad transfer Sam Crosa take the job and do a much better job. The return units could use a bit more spice.

Overall – It’s not going to be easy navigating this schedule. There are no gimmes on the out-of-conference slate (UCLA, at Ohio St, Miami Ohio, at Marshall) and they face Memphis, Houston and USF on the road.

Our CONFERENCE USA INSIDERS are high on the Thundering Herd and this game pops up before the Bearcats’ big game with UCF.

Lean to the over. There’s just too much talent on this roster to think about the alternative, schedule notwithstanding. We will shop around (as always) and see what other betting options are out there.

Cincinnati has played their home games in historic Nippert Stadium since 1924.

Last year’s victory over Virginia Tech marked their first bowl win since the 2012 Belk Bowl, a game that will forever be on the MOUNT RUSHMORE of crazy finishes and point-spread HIJINKS.

It’s division title or BUST. And to be honest, they should be setting their goals even higher. A conference title is not out of the question if they can take care of UCF at home on October 4. That will be APPOINTMENT TELEVISION, baby. They look strong on both sides of the ball but will be challenged from start to finish by a tough schedule. Let the games begin.

We’ll consider these guys for play most weeks BUT keep in mind that the secret is out and it may be hard to find betting value.