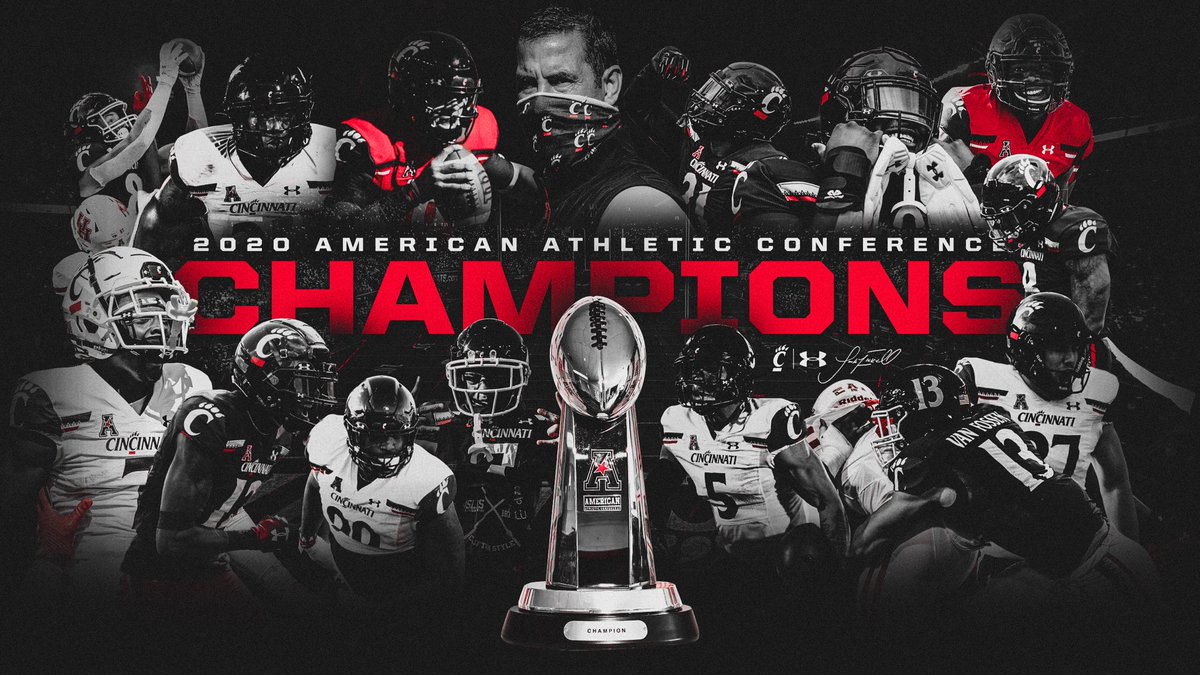 That was a mighty impressive performance from the Bearcats as they rolled through the regular season with a perfect mark of 9-0. They squeaked by a scrappy Tulsa squad in the AAC Championship Game (W 27-24) and earned a Peach Bowl date with Georgia. The Bulldogs prevailed, but Cincinnati proved that they could play with one of the premier programs in the country. What can they do for an encore?

The Bearcats used a balanced offense behind their fine QB Desmond Ridder LY (#22 rush, #25 pass efficiency) on their roll to a conference title. Ridder can beat you with his arm (19-6 TD to INT) and his legs (592, 12 TD LY). The Cats lose #1 RB Gerrid Doaks but they’ll go with a committee approach and note that projected #1 Jerome Ford averaged 6.6 YPC LY (8 TD). Ridder distributed the ball well in the THROW GAME in 2020 (10 players 10+ grabs) and expect more of the same in 2021. TE Josh Wyhle is one of the best in the AAC at his position and he led the team in receiving yards LY (6 TD). The OL performed admirably LY as they allowed just 19 sacks (#3 AAC sacks allowed per game) and Cincinnati led the conference in rushing YPC (5.57) (!). They’re less experienced up front and will miss LT James Hudson (NFL). They won’t average 37.5 PPG this year but this is still one of the better offenses in the AAC (balance, QB, toughness).

Cincinnati has been a ROCK on defense over the past three seasons (#1, #3, #1 AAC total defense) and this year’s stop unit looks like another killer. Losing ace DC Marcus Freeman to Notre Dame was a kick in the JACOBS but new DC Mike Tressel has some excellent players to work with in 2021. A pair of starters return on the DL including leading sacker DE Myjai Sanders (7) and recall that the Bearcats tallied 30 sacks LY (#2 AAC sacks per game). It hurts to lose #1 tackler Jarell White at LB but Darrian Beavers was #2 (7.5 TFL) and this group looks like the best in the AAC. They have one of the best CB combos in the FBS (Ahmad Gardner, Coby Bryant) but need to replace their pair of outstanding safeties.

PK Cole Smith doesn’t inspire a ton of confidence (4-7 FG from 30+) and they need to find a replacement for their excellent P James Smith. KR Tre Tucker averaged 30 yards a pop LY (TD).

Overall – The road game at Notre Dame is almost certainly a “must-win” if they plan on making a run for a playoff berth. They get their three toughest AAC games at home (UCF, Tulsa, SMU) so that certainly helps. There’s no Memphis or Houston on the docket.

Doesn’t appear to be a great spot from a betting standpoint as it falls between two yuuuuge games (Tulsa, SMU). It’ll also be their 3rd road game in four weeks.

Not enough margin for error in our view if you take the ‘over’. They have games at Indiana and Notre Dame before AAC play kicks off. Would shop for a 9.5 if you are bullish.

Nippert Stadium is the fourth-oldest playing site and fifth-oldest stadium in the FBS. Lights were first used in 1909 because most of the students could only practice at night. They beat something called Kentucky-Wesleyan (17-CACK) in 1923 in what was the first night collegiate football game in the Midwest.

This squad looks LOADED once again, but how will they react as THE HUNTED? The draw of AAC games is very beneficial and they have a star QB and an elite D. They’ll need to run the table to make the playoff but it seems extremely likely we see these guys in the AAC Championship Game once again.