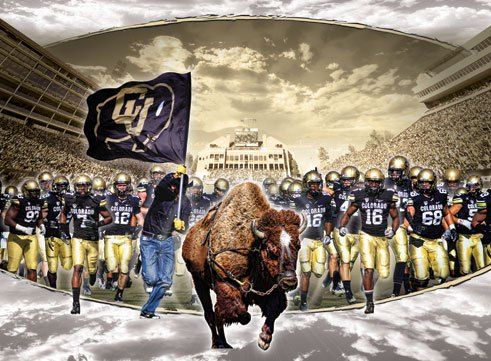 What could possibly go wrong? Colorado started out on SUPAH HOT FIRE winning their first five games. Cool. Then they lost the next 7 (!) contests in a row. THAT my friends, is how coaches get fired. Speaking of which, Mel Tucker is the new head man for the Buffs after being the DC at Georgia the past three seasons. We like the hire, but can he get Colorado back on the winning track in 2019?

If it all starts at the quarterback position then the Buffs are in good shape. Senior QB Steven Montez did some nice work last season throwing for over 2,800 yards with a 19-9 TD to INT ratio. Montez will be happy to know that one of the most exciting players in the PAC-12 is back for duty. Laviska Shenault missed a few games but still caught 86 passes for over 1,000 yards and six scores whilst rushing for another five TDs on the ground. The #2 and #3 WRs also return and KD Nixon and Tony Brown combined to catch 84 balls in 2018. The addition of TE Jalen Harris from Auburn can’t hurt.

Leading rusher Travon McMillian is gone and nobody on the roster had more than 200 yards on the ground during the previous campaign. The Buffaloes ranked #9 in the PAC-12 in rushing and we worry about their ability to mount a balanced attack. Keep an eye on freshman Jaren Mangham in fall camp as he may be a SURPRISE PACKAGE. The Buffs allowed an unimpressive 104 (!) TFL which was the worst in the conference last year and also yielded 34 sacks. Three starters return to an offensive line that needs to get a lot better if Colorado wants to make a run for a bowl game.

New HC Mel Tucker did a fine job with the Bulldogs’ defense in Athens but has a tough task ahead of him in Boulder. The Buffaloes return just 4 starters to a stop unit that allowed 27.3 PPG in 2018. The overall depth is a question mark but there are some nice pieces on board. Leading tackler MLB Nate Landman returns as does their fine DL Mustafa Johnson who led the team in sacks (7.5) and TFL (15.5). Overall, the Buffs had acceptable numbers in most defensive categories last year (#52 FBS in total defense, #44 run D, # 64 pass efficiency D, #40 3rd down D, 29 sacks) but lacked a true identity. It will be interesting to see if Colorado is able to take a step forward in year one of the Tucker regime.

Colorado should be in decent shape as there is continuity across the board.

Overall – The conference docket is very tough (draw all the top teams from the PAC-12 North) but they do have an opportunity to get off to a good start. Their out-of-conference slate is manageable with games vs Colorado St, Nebraska and Air Force. The first conference tilt is a road trip to Arizona St followed by a home game with Arizona (after a bye). They probably need to win three (maybe four?) of their first five games to have a shot at bowl eligibility.

The Buffs are coming off games vs rival Colorado St and OLD-TIME rival Nebraska. Conference play is on deck AND the Falcons are a tough team to play on any occasion.

That’s a REALLY low number but it’s hard to know what to expect in year one with a new head coach. Not interested in taking a stand either way.

Colorado won its first national title in 1990 when they split the honor with Georgia Tech. The Yellow Jackets claimed the United Press International Coaches Poll whilst the Buffaloes won the Associated Press and Football Writers Association of America polls. The MEGALOCKS POSSE was on hand at the ORANGE BOWL when Colorado capped their season with a 10-9 win over Notre Dame. When Notre Dame loses, everyone goes home happy. Just kidding. Not really.

It’s never easy to get things rolling in the first year under a new HC. Colorado’s bowl hopes  will almost certainly be determined as they navigate the early season docket. In our estimation, the Buffs need to bag a small handful of wins early on if they want to achieve a winning record. Check out the first five games, yo. The Rams will give it 100%, Nebraska is going to be REALLY tough, Air Force could rush for 400 yards, and the Sun Devils and Wildcats will be tough outs. THEN the schedule gets tough.

The betting market will take all of this to account but it’s hard to imagine Colorado having a winning record ATS. We recommend waiting to see how the first month of the season goes and then reassess.