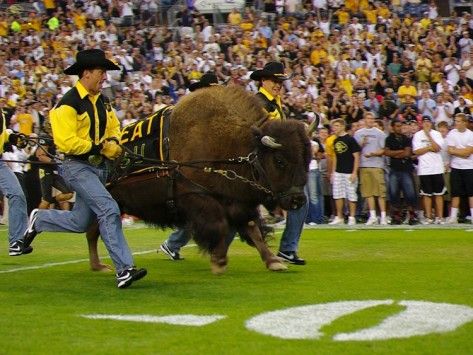 The BUFFS stormed out of the gate like their mascot RALPHIE and built a record of 4-0 before falling to the Utes at home. They actually had a double-digit lead in that game but let it slip away. USC got the bid to the title game and Colorado played their final game in the Alamo Bowl where they got smoked by Texas (L 55-23). They looked pretty good last year. Let’s see how things are shaping up for 2021.

The Buffaloes built their record around fairly sketchy QB play (#106 FBS pass efficiency) and they’ll have a new starting QB under center this season. The battle for the starting role is between Tennessee transfer JT Shrout and LY’s backup Brendon Lewis. Either way, they won’t have much experience at the position. Always everyone that caught a pass LY is back for action and #1 WR Dimitri Stanley averaged almost 17 YPC. The STRAW THAT STIRS THE DRINK is star RB Jarek Broussard who put up phenomenal numbers in the shortened plandemic season (895, 5.7, 5 TD). He SCORCHED Arizona for 301 (!) yards. And don’t forget that “backup” Alex Fontenot led the team in rushing in 2019 (874, 5 TD). Four starters return up front and they hope to replace their excellent LT William Sherman with Ohio St transfer Max Wray. <update: August camp. QB JT Shrout suffered a significant knee injury in practice>

Colorado was pretty strong vs the pass LY (#33 FBS pass efficiency D, 56%) and had a good pash rush (#2 PAC 12 sacks per game). They got loads of PENETRATION (#1 PAC 12 TFL/game) and excelled on 3rd downs (#1 PAC 12). The run D was a major issue as they allowed an untenable 181 YPG. They allowed 268,192,303 on the ground in their final three games. Eight starters return including a pair of stars. LB Nate Landman led the team in tackles LY and is the heart and soul of the defense (1st team PAC 12), and LB Carson Wells had 6.5 sacks and 16 (!) TFL in 2020. They add LB/S Robert Barnes from the Sooners and have a talented secondary. They’ll miss DL Mustafa Johnson up front. It’s hard to imagine the run D not improving given the talent they have at LB but we shall see.

Everyone returns this season and the overall talent looks decent. PK Evan Price connected on 6/8 FG LY and they have talent at PR and KR.

Overall – It’s much more difficult this year. Texas A&M and Minnesota are tough non-conference opponents and they they draw Oregon and Washington from the North. Four of their final six games are away from Boulder.

This game is sandwiched between the meeting with Texas A&M that will get some national attention, and the PAC 12 opener at Arizona St.

There’s some talent on the roster but the schedule is tough and there’s a big Q mark at QB.

Colorado had a pretty good season last year but there’s still some work to be done before we call them a legit contender in the tough PAC 12 South. They’ll be able to do good work on the ground but will likely struggle at times in the THROW GAME. The defense features an excellent LB group but could still use more overall talent. A .500 season with that schedule would have to be considered a major success. Go Buffs!