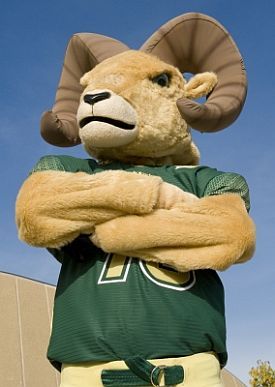 After a TRILOGY of seven-win campaigns the Rams struggled mightily and managed to win just three games. They were able to SHOCK THE WORLD with an upset over Arkansas (W 34-27) but really struggled down the stretch losing their last five contests. That was the Rams’ first losing season since 2012, so they certainly deserve a MULLIGAN.

Is it too much to expect a return to bowl season? Let’s find out.

The Rams had a serious drop in production last year and only managed to scrape together 22.8 PPG (#9 MW) after putting up 33.4 PPG in 2017. The QB play was a bit erratic but the hope is that junior Collin Hill can take the job and run with it. Nebraska transfer Patrick O’Brien is an interesting possibility but we’ll have to wait and see how things shape up in fall camp.

The RB unit has a few guys that could be a SURPRISE PACKAGE but it’s too hard to project at this point. One way or another they definitely need to improve a horrible ground attack that managed just 106 YPG a season ago (#11 MW). The WR unit is decimated by departures and the Rams must move on without their top-two WRs (Preston Williams, Olabisi Johnson) who combined for over 2,100 yards and 18 TDs LY. Maybe highly-recruited specimen Nate Craig-Myers (transfer from Auburn) can be the next big thing in the Rams’ WR unit? The status of the offensive line keeps us up at night as they performed at a mediocre level last year and bring back just a pair of starters.

The offense will be better this year because it’s almost impossible NOT to score more than 23 PPG in the Mountain West. This looks like an average group at best.

Colorado St needs to make significant improvement on defense if they plan on getting back to a bowl game. Last year they ranked #11 in the Mountain West in scoring defense (36.8 PPG), #9 in total defense (452 YPG) and bagged a mere 15 sacks (#11 MW). There is reason for optimism as 2nd year DC John Jancek gets to work with six returning starters and a decent looking DL that returns three starters. Transfer Jalen Bates (Arizona St) should help them up front.

The Rams will miss their top-two leading tacklers that booked over 140 LY, but at least they have some experience in the secondary, and that SHOULD translate into improved performance. Colorado St was atrocious defending the pass LY (30-7 TD to INT) and should appreciate a better effort up front.

This appears to be a defense that will allow a similar number of points as the 2016 squad (30.4 PPG).

The unit was a borderline FIASCO a season ago and we still have our doubts. P Ryan Stonehouse is rock solid but they need to find a new PK and improve the production on returns.

Overall – It’s going to be tough to get to six wins. The out-of-conference slate features games with Colorado, Arkansas and Toledo. They draw San Diego St and Fresno St from the West Division.

The Razorbacks will have REVENGE on their minds after losing to the Rams last year. We like backing underdogs but will stay clear of this opportunity, yo.

Slight lean to the ‘over’. They will be better this year, but as noted above, the schedule doesn’t do them any favors. Also keep in mind that the Rams have finished with exactly three wins in FOUR of the last ten years. Not saying, just saying.

Colorado State football dates back to 1893 when it was known as Colorado Agricultural University.

The Rams last bowl win came in 2013 in just another one of those WACKY bowl game finishes. Why run out the clock with a kneel down when you can run a play and fumble? Thanks, Washington St! Final score, Colorado St 48 Washington St 45, and your pal Jim McElwain looks like a genius and eventually gets $8 billion to be head coach at Florida. And we win a wager in lucky fashion. Everybody goes home happy.

This feels like a turning point in the MIKE BOBO EXPERIENCE. The Rams took a bit of a DUMP last year and we’re not sure if they can flip the switch and turn things around. Then the question becomes, what do we do with our head coach? We are skeptical about the offense and cautiously optimistic about the defense. Hmm. Feels like a team that should be avoided from a betting perspective until we get a better read on what they bring to the table.