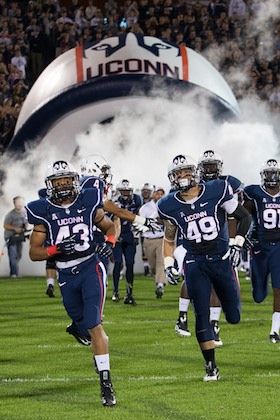 Record – Did not play

ATS – Did not play

The last time we saw these guys in action was back in 2019 when we witnessed another EXERCISE in FUTILITY. They finished 2-10 that season and were outscored by an average of 41-19. Those two victories? Wagner and Massachusetts.

Let’s check in with these guys and see what’s on the horizon in 2021.

There’s definitely reason for optimism as the Huskies return a promising set of TRIPLETS to build around. QB Jack Zergiotis had his moments in 2019 and had four 250+ yard passing games. That included a 418 (!) yard performance vs East Carolina. He’ll need to cut down on the INTs if the offense wants to function efficiently (9-11 TD to INT). RB Kevin Mensah is a LEGIT #1 RB and recall that he rushed for over 1,000 yards and 8 TDs in 2019 (five 100-yard games), and also turned that trick back in 2018. They’ll miss #2 rusher RB Art Thompkins who also bagged 39 receptions 2YA (#2 team). #1 WR Cameron Ross was great last time we saw him (60-723, 12.1, 4 TD) and will give Zergiotis a legit target. We’re not sure about depth at the skill positions but TE Jay Rose is a reliable weapon (27-261, 2 TD) and RB Robert Burns comes over from YOUR Miami Hurricanes. The OL is a mystery at this point as they’ve lost a number of guys due to graduation and transfer since we last saw them play.

The 2018 Huskies’ defense was one of the worst in college football history. The 2019 version was really bad, but not “historically bad”. They allowed 40.5 PPG (#128 FBS) and were poor vs the run and the pass. Connecticut’s opponents scored 40+ on six occasions. Only one FBS team failed to hit the 30 mark (Houston, 24). Seven starters return from the 2019 unit but they’ll be without their best player on this side of the football and leading tackler DB Tyler Coyle. The LB unit appears to be the strength of the defense as they are experienced and pretty deep at the position. Omar Fortt and Jackson Mitchell were #2 and #3 respectively in tackles 2YA. The DL could be better than expected as they return their top-three sack men in Kevon Jones, Travis Jones, and Lwal Uguak who combined for 10.5 of those BAD BOYS in 2019. They’ll endeavor to make improvement on the back end as they’ve allowed 63.8%+ completions in each of the last four seasons and only picked off 9 passes in the full 2019 campaign.

Overall – It’s an interesting mix of winnable games (Holy Cross, UMass, Yale) and likely CARNAGE (at UCF, at Clemson, Houston). There’s a long break from when they play MTSU (October 22) and at Clemson (November 13).

This will be their 3rd road game in four weeks and they’ll be coming off physical games with Wyoming and Vanderbilt.

That looks about right. They’ll probably have to sweep the games with Holy Cross and Yale and that isn’t a LOCK.

Connecticut’s football program is once again an INDEPENDENT after competing for 16 years in the AAC and Big East. Their high water mark was the 8-5 season in 2010 in which they made the FIESTA BOWL. The Sooners prevailed by a score of 48-20.

The Huskies have only managed to bag six wins over the last three seasons. Half of those victories came against FCS foes. The hope is that they’ll be more competitive after leaving the AAC. It’ll be interesting to see how they fare after missing an entire season of football. We expect them to win two or three games.