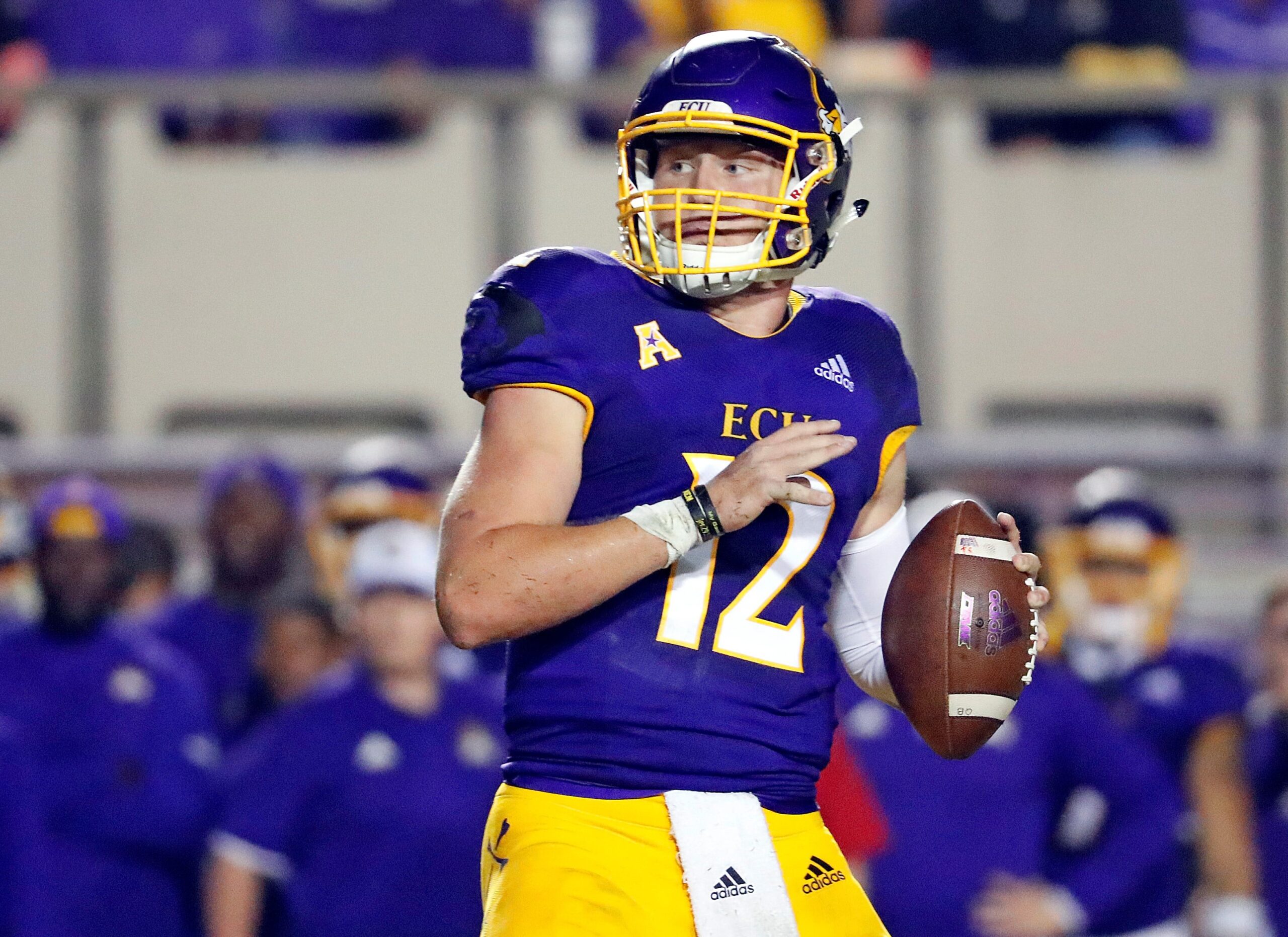 East Carolina got off to a slow start losing six of their first seven games and they allowed a HUNDO in their first two contests (UCF, Georgia St). They could have cried and taken the ball and gone home but they kept on fighting. The Pirates took down Temple (28-3) and SHOCKED the WORLD in the finale by hammering SMU (W 52-38). They head into 2021 with a bit of momentum and an experienced roster. Let’s go!

The Pirates made strides on offense LY and averaged 30 PPG for the first time since 2014 (!). They were pretty balanced (174Y rush, 229 pass) and bring back the vast majority of their key parts. QB Holton Ahlers is a mobile veteran with 51 TD passes to his credit and he gets back two of his three top targets. WR Tyler Snead caught 53 balls LY and WR C.J. Johnson averaged 21.3 YPC. The 1-2 combo at RB is solid and note that Rahjai Harris and Keaton Mitchell combined for over 1,000Y and 6 TD whilst averaging just under 5 yards a pop in 2020. There’s a decent amount of size and experience up front and they should be able to support a well-balanced attack. It’s feels like a decent bet to expect 30+ PPG once again in 2021.

It’s been a while since East Carolina has shown any backbone on defense as they’ve allowed well over 30 PPG every year since 2015. The Pirates ranked #98 in the FBS in run defense LY and #80 in pass efficiency D. Improvement should be expected this year given the return of 10 starters and the vast majority of their top-20 tacklers from a season ago. Three starters are back up front but they appear to be significantly undersized and will have to rely on disruption and PENETRATION. No returning DL had more than one sack LY. The LB group looks good and features the team’s top-two tacklers (Xavier Smith, Jireh Wilson) who combined for over 140 tackles and 14.5 TFL in 2020. The secondary has some nice pieces including CB JaQuan McMillian (EC #6 pass eff D AAC LY, 17-10 TD to INT).

It’s good to see talented PR/KR Tyler Snead back in the mix but they’ll need to find a replacement for long-time PK Jake Verity.

Overall – They start off with a trio of tough out-of-conference games (App St, South Carolina, Marshall) but at least they get four of their first five games at home. The AAC road docket is tough (UCF, Houston, Memphis) and they finish the regular season vs the Bearcats in Greenville.

This game follows what should be an emotional effort vs South Carolina and the Herd are mighty tough at home.

They’ll do well to get to bowl eligibility with that nasty schedule.

East Carolina WR Zay Jones holds the NCAA record for most receptions in a single season thanks to his 158-catch (!) season in 2016. 158. That’s a FACT CHECK TRUE.

The Pirates are slowly but surely getting better. The question becomes, can they improve enough this season to be a factor in the tough AAC? They’ll be able to SCORE THE FOOTBALL on most teams but the defense still looks sketchy. We’ll call for a four-five win season and at least one decent-sized upset along the way. In any event, Go Pirates!!