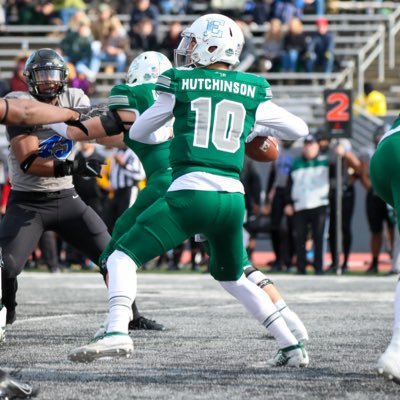 The Eagles dropped a couple of close ones to start the season losing to Kent St and Ball St (both on the road) by a combined 11 points. They actually started 0-4 before SHOCKING THE WORLD and taking down Western Michigan as double digit underdogs (W 53-42). They finished the year with a win over Northern Illinois and head into 2021 riding a two-game winning streak. Let’s go!

The Eagles improved their scoring output (33.2 PPG) for the third consecutive season and averaged 277 YPG through the air (#4 MAC). They tallied 500+ yards of total offense vs Ball St (!) and Western Michigan. QB Preston Hutchinson is one of the more underrated players in the MAC and posted solid numbers LY (64%, 12-6 TD to INT, 8.4; 8 rushing TD). Hutch has his top-two WRs back for duty in Hassan Beydoun and Tanner Knue who combined for over 900Y and 4 TD a season ago, and TE Thomas Odukoya snagged a pair of TD passes. They’ve got to get more out of a ground game that hasn’t averaged 4+ YPC since 2016 and RB Darius Boone (5.8 YPC LY) definitely has the upside to provide some punch. Recall that Boone missed a good chunk of the 2020 season due to injury. Five starters are back on the offensive line and they have decent size. The Eagles were #10 in the MAC in sacks/allowed per game in 2020. We expect another productive campaign and it’s worth noting that they have depth across the spectrum of skill positions.

Eastern Michigan was a HORROR SHOW on this side of the ball LY and allowed 492 YPG (LAST in the MAC) and an UNSEEMLY 239 YPG on the ground whilst booking a mere 9 sacks in 6G. They played a nasty set of MAC offenses but improvement must be made if they plan on getting into the top half of a nasty division. 11 (!) starters are back as well as the top-11 tacklers from LY. There are a few decent pieces to work with up front as DE Turan Rush bagged 4.5 sacks LY and NT WOO Scott is a 330-pound space-eater. LB Terry Myrick is one of the best at his position in the MAC (#1 tackles, 5.5 TFL) and LB/S Alvinoski LaFleur can MAKE PLAYS. The pass defense could still be an issue and recall that they allowed 67% completions LY and only picked off 3 passes. The transfer of Rutgers CB Jarrett Paul should help.

Overall – It’s probably BLOODBATH CITY when they face Wisconsin in Madison but the other three non-conference tilts are winnable. Their season will be decided in November when they take on Toledo, WM, and CM.

They have a really good shot of heading into MAC play with a 3-1 record but the West is pretty nasty and the Eagles have a habit of losing close games. Doubt we’ll participate in this market as there’s definitely upside with this squad.

Eastern Michigan led the FBS in red zone scoring LY and SCORED THE FOOTBALL on all 28 of their 28 opportunities. **

This has the potential to be a fun season for Eastern Michigan fans. The defense needs to take a step forward but they’re solid at QB and in the kicking game. The November schedule is nasty but they should be in the mix at that point. They’re probably not good enough to win the MAC West but they’re definitely capable of SHOCKING THE WORLD once or twice and making a bowl game. Go Eagles! KAW KAW.