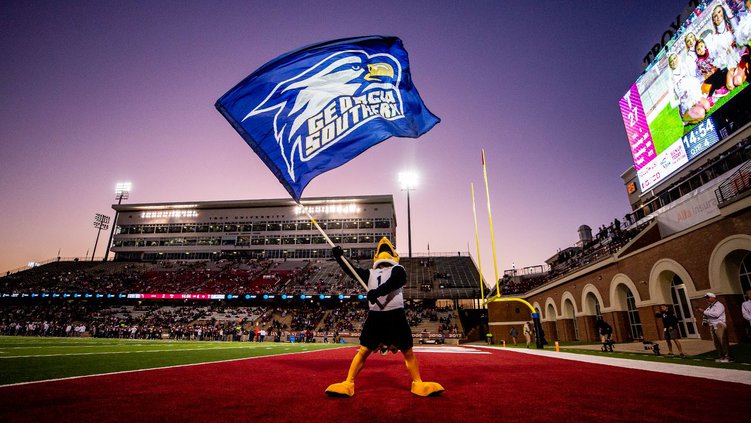 The Eagles quietly put together a solid campaign and won eight games. While it’s true that they didn’t beat anyone with a pulse (Campbell, ULM, UMass, South Alabama, Troy, Texas St, FAU, La Tech) it’s important to note that they gave teams like Louisiana, Appalachian St, and Army all they could handle (Iost by combined 11 points). They finished the plandemic campaign with a BLOWOUT win over the Bulldogs in the New Orleans Bowl (W 38-3).

The Eagles moved like a TREMENDOUS MACHINE on the ground (as per usual) LY and rolled for 267 YPG (#5 FBS). Opposing DCs aren’t gonna get much sleep looking at the DEEP RB room that Georgia Southern will bring to the table in 2021. Three of their top four RBs are back for battle (King, Wright, Green) and they combined for almost 1,500Y and 11 TDs LY. AND, they add Tulane transfer Amare Jones to the mix. They’ll miss the leadership and rushing ability of QB Shai Werts who’s off to LUA-VUH but the hope is that Justin Tomlin can fill the void (44%; 218 rush LY, 5.2). They don’t utilize the THROW GAME very often but do have at least two decent targets in WR Khaleb Hood (224, 14.9, 2 TD) and TE Beau Johnson (16.8, 2 TD). The OL looks to be in good shape with four starters and over 100 career starts returning.

Yes, guy. That was a fine performance a season ago and they ended up ranked #1 in the Sun Belt in total defense (326 YPG) and #3 in scoring defense (20.8 PPG). There’s reason to be a bit concerned heading into 2021 as they lose some key components to the stop unit, particularly at LB where #1 tackler Rashad Byrd (6.5 TFL) and Reynard Ellis (6.5 TFL, #3 tackler) need to be replaced. They also lose star DE Raymond Johnson who booked 14.5 TFL (!) and an impossible 15 QBH LY. The good news is that they add multiple Power 5 transfers at LB and return every starter in the secondary including 1st Team Sun Belt CB Derrick Canteen who had 6 (!) INTs LY. They still look to be a solid group but will likely be down a notch.

The Eagles will need to get better performance out of P Anthony Beck and the coverage team (35.4 net) and PK Alex Raynor who made just 3/8 FG from 40+. Khaleb Hood booked a PR TD LY.

Overall – The non-conference docket isn’t easy (at FAU, at Hogs, BYU). They start FUN BELT action with the nasty Cajuns and face Coastal Carolina (H) and Appalachian St (A) in November.

There are some tough games to be sure, but we forecast them cobbling together 5+ wins.

The Eagles led the FBS in takeover last year with 26. And get this. They have a turnover margin of +39 since 2018.

Georgia Southern has been REALLY good over the past three seasons posting a record of 25-14. They deserve a lot of credit for that success but note that the FUN BELT is getting tougher and tougher every year. They’ll be able to run the ball down most teams’ throats but may take a step back on defense. We’ll call for bowl eligibility but don’t think they have the MINERALS to win the East division.