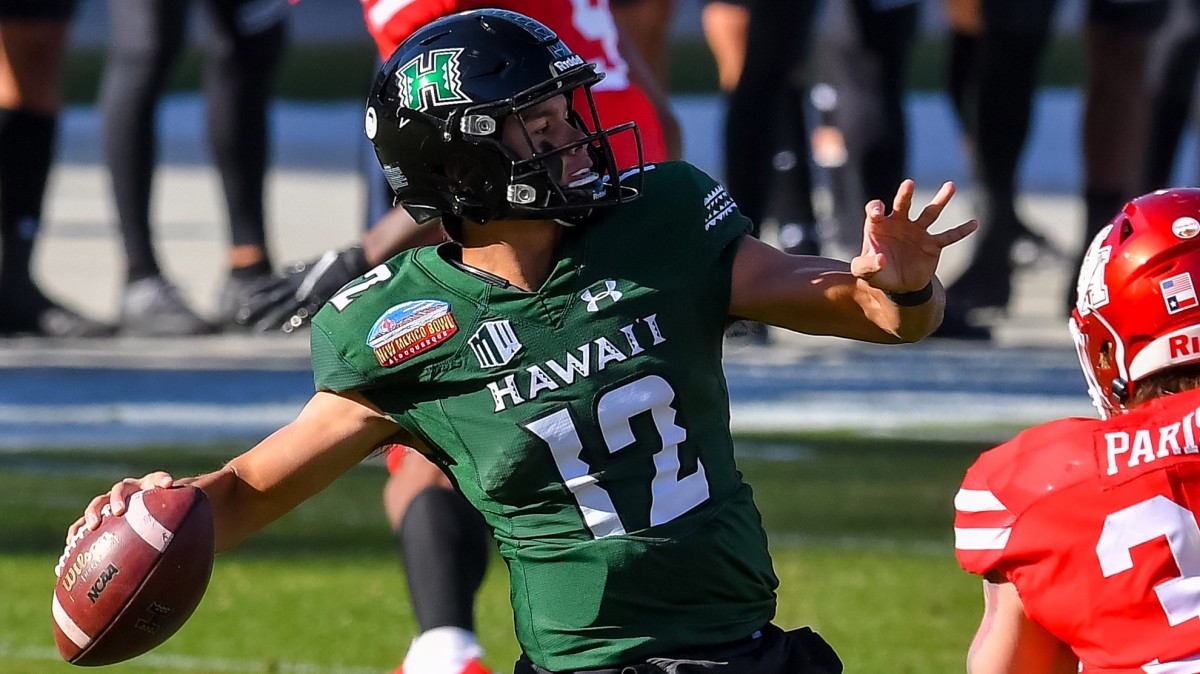 Hawaii had an up-and-down regular season winning as many games as they lost (4-4). They did manage to pull an upset over a really good Nevada team (W 24-21) and note that all four of their losses were understandable (Wyoming, SD St, Boise St, San Jose St). They finished up on a high note by taking down Houston in the New Mexico Bowl (5-4) and will look to continue that momentum going in 2021.

Hawaii did just enough on offense (#5 MW rushing, #5 MW passing) and relied on QB Chevan Cordeiro to work his magic. Cordeiro had a decent year throwing the football (62%, 14-6 TD to INT) but averaged just 6.7 YPA (Hawaii #9 MW). #1 WR Jared Smart returns but he averaged just 8.9 YPC and their #2 and #3 WRs are both gone. It remains to be seen what kind of quality lurks in the WR and TE rooms. RB Calvin Turner was a dual-threat BEAST last year and proved to be a great fit for the offense. He was #3 on the team in rushing (345, 5.5, 4 TD) and led the team in receiving yards by a wide margin (33-546, 16.6!, 6 TD). Dae Dae Hunter provides good depth at RB and recall that QB Cordeiro led the team in rushing LY. We’d like to see them do a better job in pass protection as they allowed 28 sacks (#10 MW/game) despite having a mobile QB. There’s upside with this offense but they’ll need to find more explosiveness at WR in order to make defenses sweat.

The Rainbow Warriors allowed fewer than 30 PPG (27.6) for the first time since 2014 and they were particularly effective vs the pass where they finished #14 (!) in the FBS in pass efficiency D. They allowed a mere 55% completions whilst leading the conference in INTs by a wide margin (12). They were rolled by opponents’ ground games to the tune of 212 YPG (#9 MW) and need to find a way to shore things up. The overwhelming majority of the defensive roster returns for duty and they add a couple of nice pieces on the DL including Utah transfer Pita Tonga (6’1 323). Their LB group is one of the best in the MW and they’re led by #1 tackler LB Darius Muasau who garnered 1st Team MW honors with a yuuuuge 2020 campaign (104T, 9.5 TFL, 7 QBH). There’s no reason to think that the secondary will not excel again particularly if they get more of a pass rush (18 sks, #10 per game MW), and note that they add some talented specimens to the group via the transfer portal.

Overall – It never hurts to get New Mexico St TWICE in the same year and they also play something called Portland St in non-conference action. They also avoid Boise St.

Seems like we wanna go ‘over’ a lot of MW win totals. We’ll obviously pick our spots and Hawaii looks like a solid bet to book at least seven wins out of their 13 (!) games.

This doesn’t look like a loaded roster BUT they have an underrated defense and are in year two of the Todd Graham experiment. Improvement is certainly possible and the schedule is favorable. They’ll have to pull an upset or two to win the division so we’ll call for seven wins and a bowl game. Go Hawaii!