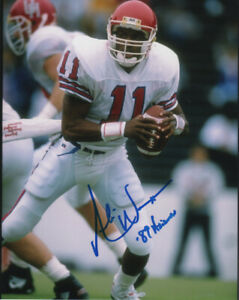 There weren’t too many teams impacted more by the scamdemic season than the Houston Cougars. They still managed to win three conference games, and note that they lost to some really good teams including BYU, UCF, and Cincinnati. The COOGS ended the regular season with a mark of 3-4 and then fell to Hawaii in the New Mexico whilst playing without several key players (L 28-14). Let’s see how things are shaping up heading into 2021.

The Cougars look pretty good on this side of the football. QB Clayton Tune was inconsistent LY (60%, 15-10 TD to INT) but he’s a good leader with annoying mobility (253, 5 TD). Two of the top-three WRs depart but Houston made some nice additions via the transfer portal including Jaylen Erwin (UCLA) and KeSean Carter (Texas Tech). The depth looks good, but we’re just not sure if they have a legit #1. Time will tell. It appears to be a committee approach at RB as there’s also no clear #1 option. Keep your eye on Texas Tech transfer RB Ta’Zawn Henry. The OL looks rock solid with the return of over 100 career starts. The offense doesn’t look elite on paper but we think they’ll exceed LY’s output of 30.0 PPG by a decent margin.

Houston has allowed more than 30 PPG in three consecutive campaigns and they’ll need to SACK UP in 2021 if they have any hope of competing in the tough AAC. They bring back nine starters but lose leading tackler LB Grant Stuard to the NFL (Bucs), as well as leading sack man DE Payton Turner (5 sk LY). They’re experienced but a bit undersized up front, and hopefully Iowa St transfer DT Latrell Bankston can make an impact (6’0 300). Despite allowing an unseemly 16-3 TD to INT ratio we have good feelings about a secondary that returns a bunch of legit players including CBs Damarion Williams (7 PD LY, 2 INT 2019) and Marcus Jones (18 career PBU, 5 INT).

Overall – It’s tasty, yo. The non-conference slate is very manageable and they miss UCF AND Cincinnati. They only have one road game in November.

It wasn’t too long ago that your pal Tom Herman led the Houston Cougars to a 13-1 record and AAC Championship. That 2015 squad’s only loss? Connecticut. Trivia nugget, yo.

This feels like the first chance the Cougars have to SHOW THEIR CARDS under HC Dana Holgorsen. They’re set at QB and they just need a few stars to emerge at RB and WR to really get things rolling. The defense is a bit of a concern but has some upside. And the schedule? VERY favorable. We give them a PUNCHER’S CHANCE to make some noise and get into the AAC Championship Game.