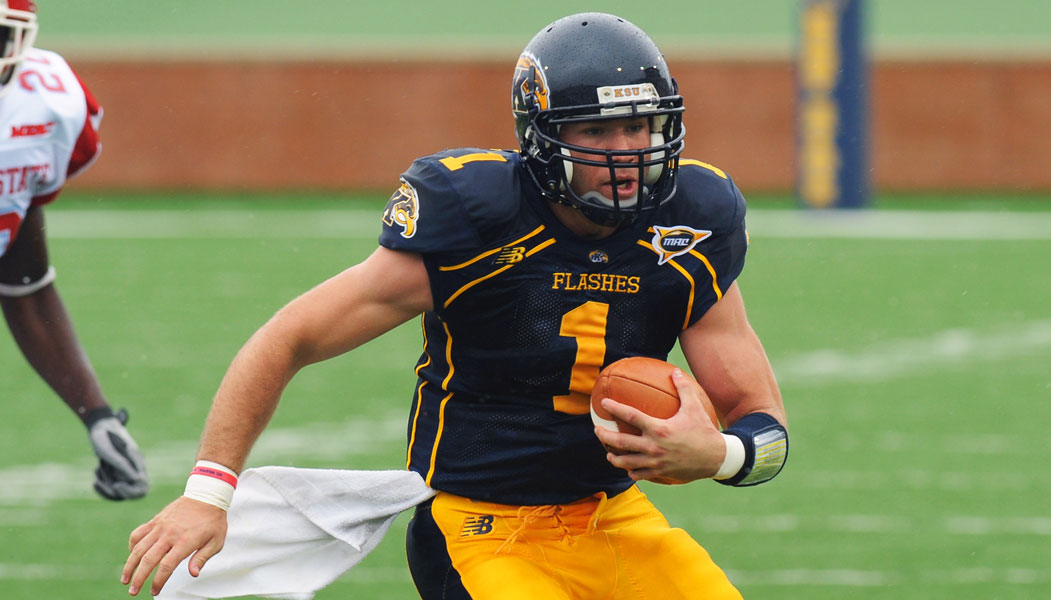 The Golden Flashes only managed to get in four games during the 2020 casedemic season but still provided fans with a lot of excitement. More on that below. They rolled a trio of TOMATO CANS to start the year (Eastern Michigan, Bowling Green, Akron) but proceeded to give up approximately 89,000 rushing yards to Buffalo in a 70-41 DEBACLE. That’s where the story ended. Let’s see how they look heading into the upcoming year.

#FlashFAST was in full effect last season as they led the FBS in total offense (607 YPG) whilst doing it with great balance (#3 FBS rushing, #2 FBS passing efficiency). Things should continue to be SPICY this year with the return of star QB Dustin Crum (73.5%, 12-2 TD to INT, 10.5 YPA, 240 rush, 4 TD) and a BEVY of weapons. The rushing attack was excellent LY (5.7 YPC) and they return the fine 1-2 RB combo of Marquez Cooper and Bryan Bradford. #1 WR I McKoy departs but the group is very deep and they do a great job of spreading the ball around. Adding WR Nykeim Johnson won’t hurt (Syracuse). Five starters are back up front and they allowed a mere five sacks in 4G LY in addition to doing a great job run blocking. The schedule was light but it’s worth noting that Kent St converted 56% of their 3rd down opportunities (#2 FBS). This will be a lethal offense and easily one of the best in the MAC.

The Golden Flashes struggled mightily on defense LY and allowed an UNSEEMLY 38 PPG whilst finishing #123 in the FBS in rush defense. They were effective vs the pass (51.6% completions) and had a good pass rush (11 sacks in 4G) but it’s worth remembering that their schedule was pretty light. Eight starters are back on this side of the football as are seven of their top-9 tacklers. They were steamrolled by Buffalo LY but didn’t fare too well if you forget about that HORROR SHOW (515 rush yards, 70 points). They have potential to be better up front with ends Zayin West and Jabbar Price back in the mix and a 330-pound man on the nose (CJ West). They’re experienced at LB and they add Juan Wallace to the group (Syracuse). The back end that was pretty good vs the pass LY brings back Dean Clark and Richie Carpenter (#1, #3 tackles respectively), as well as a potentially yuuuuge addition in S Antwaine Richardson (Maryland).

There’s potential for some decent upside on defense but note that the Golden Flashes have allowed an average of 35.5 PPG during Sean Lewis’ run as HC. The pass rush should be there.

Overall – YIKES. That’s one nasty non-conference slate. Road tilts with Texas A&M, Iowa, and Maryland are on tap before MACtion begins. They catch a break by missing Toledo and Ball St in crossover play.

This will be their 4th roadie in five games (six weeks) and they have a game with potentially yuuuge implications the following week (Miami Ohio).

They’ll almost certainly going to need at least four wins in conference play to get to five wins. That seems extremely doable.

The 1972 Kent St squad booked the only MAC Championship in school history. They were coached by legendary coach Don James and boasted some familiar faces on the roster. All-time great NFL LB Jack Lambert (may or may have not actually EATEN an opposing player on the field, according to legend), former long-time Missouri coach Gary Pinkell, and some other dude you may have heard about. Nick Saban.

BUCKLE UP, yo. This should be a really entertaining team. The offense will be able to SCORE THE FOOTBALL on anyone in the MAC and the defense should take a step forward. They get Ohio and Miami Ohio on their home field and that’s good news. SERIOUS player in the East and legit shot to take down the MAC.