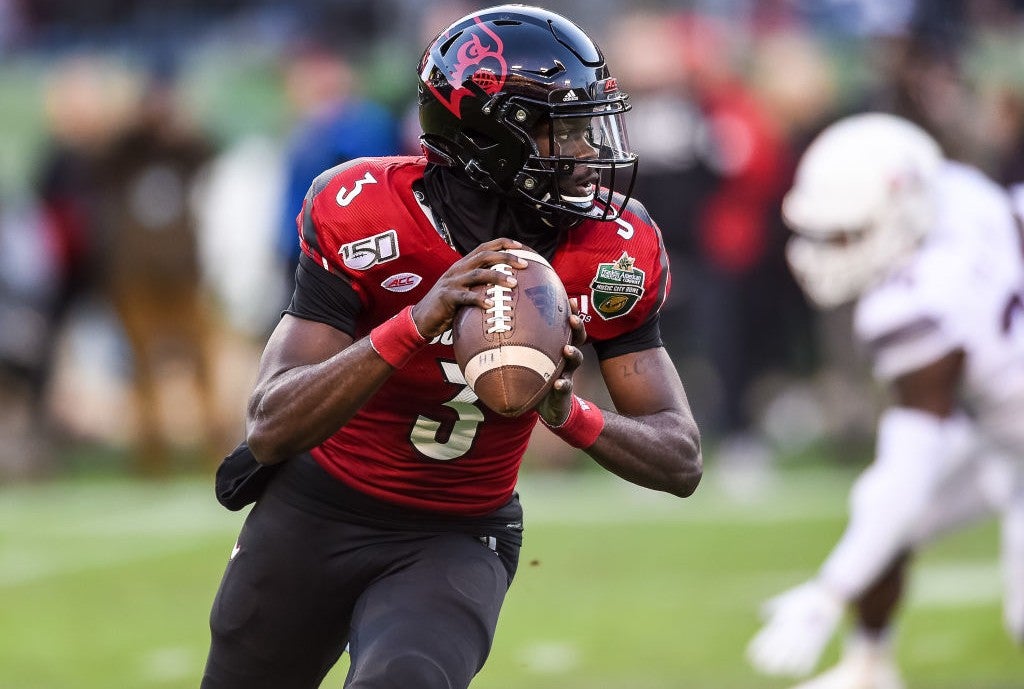 The VILLE started the season with a win over Western Kentucky but then proceeded to go into a tail spin for the next number of weeks. They played Pitt and Notre Dame tough but got wiped out by a rebuilding Georgia Tech squad. LUA-VUH showed a bit of life at the end of the year winning two of their final two contests (Syracuse, Wake) and head into 2021 with a TITCH of momentum.

There was nothing wrong with the offense LY as they ranked #29 in the FBS in rushing offense and #30 in passing efficiency. New HC Scott Satterfield has definitely got them humming (444, 447 YPG L2Y). Electric QB Malik Cunningham returns off a fine year (64%, 20-12 TD to INT, 609 rush, 7 TD) and just needs to cut down on his mistakes. Note that he has a very good 42-17 TD to INT mark over the L2Y and 18 (!) rushing TDs since 2018. Three of their top-four RBs are back but they lose #1 Javian Hawkins to the NFL (Falcons). Continuity from year to year in the THROW GAME is very important and the Cards will have to deal with losing the DEVASTATING WR combo of Dez Fitzpatrick and Tutu Atwell (combined 1400+ receiving yards LY) as both of those men are ALSO off to the pros. #3 WR Braden Smith returns as does their fine pass-catching TE Marshon Ford (309, 6 TD). The offensive line is large and talented (4 RS) but recall they were dead last in the AAC last year in TFL allowed per game.

LUA-VUH was sneaky good on defense LY (#3 ACC total defense, 369 YPG) and allowed just 26.6 PPG. The D has improved yuuuuge under Satterfield from allowing 44.1 (!) PPG in 2018. Just two of the top-seven tacklers return and there are some holes to fill, and that includes their top-two in TFL (LB Rodjay Burns, LB Dorian Etheridge). There are still some nice pieces to build around including #1 tackler LB C.J. Avery, star CB Kei’trel Clark, and leading sacker Monty Montgomery (4). We’ll call for a slight drop in production but the downside risk is greater than the upside with this bunch.

Overall – The opener with Ole Miss is SPICY. Get ‘cho calculators, yo. They also draw UCF and Kentucky in non-conference play. The draw from the Coastal is nice (Duke, Virginia). Note that their first two ACC games are ON THE HIGHWAY.

This could be a letdown spot after the firefights with UCF and Florida St.

We don’t see many free squares on the docket. Seven wins won’t be easy.

This isn’t an easy team to get a handle upon. You never get better on offense losing three stars at RB and WR, but we really like Cunningham at QB, even though he can be frustrating to watch at times. The defense may have overachieved a season ago and they’ll need to pull their weight if the Cards have any hopes of making noise in the ACC. A bowl bid is a reasonable goal.