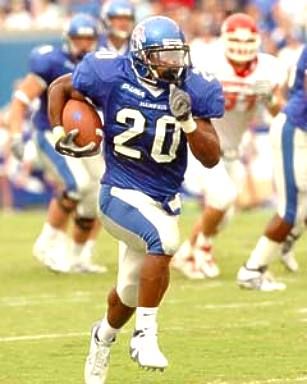 The Tigers lost their opening conference game after blowing a double-digit lead to Navy and that put them behind the 8-ball STRAIGHT AWAY. They get full marks for keeping the faith and winning their final four AAC tilts (at East Carolina, Tulsa, at SMU, Houston) before falling for the second consecutive year in the conference title game to UCF (L 56-41).

Can the third time be a charm for the Tigers this year?

Memphis moved like a TREMENDOUS MACHINE last year and averaged 40+ PPG (42.9) for the third time in four years. The scoring output ranked #7 in the FBS and their 523 YPG placed them in the #4 spot in all of college football. They have a new OC this year (Kevin Johns, Texas Tech LY) who has plenty to work with in 2019. QB Brady White is just a junior and has already established himself as a star performer (3,296, 63%, 26-9 TD to INT LY). White has plenty of JUICY targets to utilize in the THROW GAME including last year’s #1 WR Damonte Coxie (1,174, 16.3, 7 TD LY) and the aptly-named TE Joey MAGNIFICO (363, 17.3, 5 TD LY). The Tigers had an impossibly-amazing RB combo last year that combined for 38 (!!) rushing TDs and one of those men is off to the NFL (Darrell Henderson – #3 DC Rams). Patrick Taylor had over 1,100 yards rushing LY and hopefully the Tigers can find an adequate #2 back to take some of the workload. An underrated departure is Tony Pollard who racked up 552 rushing yards and 39 (!) receptions in 2018.

The offense is still going to be potent but almost certainly down a notch in terms of point production. As long as the OL can hold it’s ground (two returning starters, phenomenal C) we expect the Tigers to hit the 40 PPG once again.

The Tigers defense allowed 30+ PPG for the second consecutive season LY (31.9, #6 AAC) and were ultimately responsible for another CLOSE BUT NO CIGAR season. After all, you can’t give up 118 combined points in the last pair of AAC Championship Games and expect that good things will happen.

We have good MOJO looking forward as the Tigers bring back eight starters including a small handful of REALLY talented individuals. The defensive line looks fantastic on paper with three returning starters, nice size and 1st Team AAC performer Bryce Huff (19 TFL, 7 QBH LY) back for his senior campaign. New DC Adam Fuller (Marshall LY) ought to be licking his chops. A pair of starters return at LB and the secondary should be much improved with Auburn transfer CB John Broussard added to the mix to go along with all-Universe CB TJ Carter. What we REALLY like is that the Tigers got excellent PENETRATION a season ago and booked 37 sacks (#2 AAC). A ton of that production returns this year including three men that tallied 6+ sacks in 2018.

Our AAC DEFENSIVE PROJECTION INSIDERS anticipate a good-sized improvement in most defensive metrics this year.

We love ourselves a good kicking game and the Tigers appear to be in good shape. PK Riley Patterson nailed 15/20 three-pointers LY and punter Adam Williams booked a 38.3 yard net. They will miss Tony Pollard on KRs a LOT but it’s good to know that POP Williams averaged 10.8 yards per PR on 29 attempts (TD).

Overall – There isn’t an “unwinnable” game on the slate. It starts out tough with a home date vs Ole Miss and ends in difficult fashion (at Houston, at USF, Cincinnati). The middle portion of the schedule should go smoothly.

This SANDWICH GAME fills in the gap between conference dates with Navy and Temple. It should also be noted that the Warhawks can SCORE the FOOTBALL.

We think the ‘over’ is the better move but not crazy about the price tag. Taking a pass for now.

When HC Mike Norvell was introduced as the head football coach on December 4, 2015 he was the youngest head coach in the FBS at that time (34). Now he is the 7th youngest. Youth movement, baby.

There’s a good chance that this team is a wrecking ball. They are solid on both sides of the football for a change and have a decent schedule. They avoid UCF from the AAC East BUT we have a sneaky suspicion they may meet once again in December for all the AAC MARBLES. <grabs popcorn>

HC Mike Norvell has posted a 20-19-1 ATS mark during his tenure at Memphis and we have positive vibes about this year’s prospects vs the number. It may be hard to find value at times, but if the defense plays as well as we think, their opponents might be taking trips to BLOWOUT CITY on many occasions.