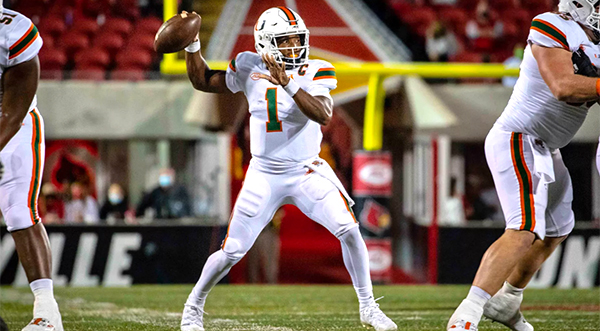 YOUR Miami Hurricanes got off to a hot 3-0 start which included a PRISON-STYLE beating of the Seminoles (W 52-10). Not even RUDY would want to go to Florida St after that debacle. Miami got blown out by Clemson in their next outing but finished strong and won five straight before getting torched by North Carolina to end the regular season (L 62-26). They lost their star QB in the bowl game but still gave Oklahoma St a battle in the always-entertaining CHEEZ-IT Bowl.

The $780,000 question centers around QB D’Eriq King. Is he 100% healthy and ready to go? Early reports from our DEEP MIAMI HURRICANES INSIDERS indicate that he’s recovered nicely and that’s a good thing. King had a fine 2020 campaign (64%, 23-5 TD to INT, 538 rush, 4 TD) and displayed the kind of leadership Canes fans hadn’t seen since the Lincoln administration. The WR/TE situation is as good as it’s been in a while and everyone of consequence other than stud TE Brevin Jordan is back for battle. Adding WR Charleston Rambo from the Sooners doesn’t hurt. The RB group is deep and experienced and Cam’ron Harris is more than capable of booking a 1,000-yard season if he gets enough carries (126-643, 10 TD LY; 18 receptions). All five starters return up front and they have a ton of starting experience. According to the great Phil Steele, the 190 returning career starts are the most since he began tracking that stat. Overall, this offense looks REALLY good.

The Canes took a step back on defense LY and allowed 27.0 PPG (20.2 in 2019) and 408 YPG (310 in 2019). They displayed a SOFT UNDERBELLY vs the run (174 YPG, #8 ACC) and will have to remedy that flaw if they wanna be a legit ACC contender. Oh ya. We almost forgot. They’ll need to replace their top-two pass rushers in Quincy Roche and Jaelan Phillips (not to mention Greg Rousseau who opted out LY) who combined for 12.5 sacks and an impossible 30 TFL. Three starters return to the DL and getting Deandre Johnson from Tennessee will help, but it’s still unclear if they’ll have the CHOPS to improve significantly. The secondary appears to be their best unit with the return of 2nd Team ACC member safety Bubba Bolden and the addition of CB Tyrique Stevenson from Georgia. There’s lots of talent back here. This appears to be a really good defense, but they’ll need to find some potent pass rushers in order to meet their overall potential.

Losing ace PK Jose Borregales stings and the hope is that highly-regarded specimen Andres BORREGALES can fill in his SHOES. Punter Lou Hedley is outstanding (47.2, 45.0 net LY). They just need to get more production at KR and PR. That’s happened before.

Overall – WHOA NELLIE. The opener vs ROLL TIDE is gonna be nasty. They miss Clemson which is SWEET and note that they get 16 days off before the yuuuuge showdown with North Carolina. Sidenote: That’ll be their first TRUE road game (October 16th).

They could be in for a bit of a letdown after the game with ROLL TIDE. Miami is 5-6 ATS as home chalk under Manny Diaz and App St has something called Elon on deck.

That looks about right. 78 of our 89 sets of power ratings have them pegged at nine or ten wins.

The Hurricanes last conference title came back in 2003 when they took down a share of the Big East crown. Who did they share it with? West By God Virginia. That’s a tasty trivia nugget, yo.

There’s definitely reason for excitement in Coral Gables. The offense should be potent, assuming that King is back to his old self, and the defense definitely has upside. It’ll be interesting to see how they fare in the opener vs ROLL TIDE and there’s really no reason for them to get blown to bits <says prayer> <just kidding, not really>. They have to face North Carolina and Pitt on the road, so if they manage to win the division, they’ll have to earn it. Go Canes!