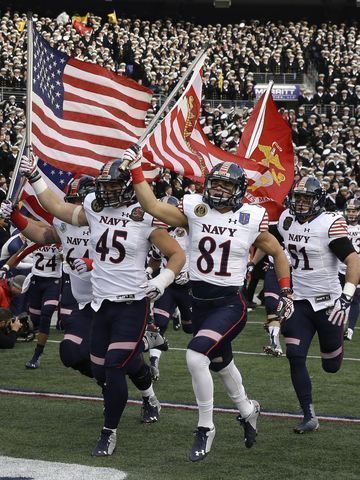 Navy struggled for most of the season and booked their first losing season since 2011. They started out at 2-1 and managed to pull off a comeback win over Memphis, but then they went into the TANK losing nine of their final ten games. That meant a rare absence from bowl season. They finished the year in decent fashion beating Tulsa, losing to Tulane by a single point (L 29-28) and then giving Army all they could handle in the season finale (L 17-10).

Army is widening the gap between the two football programs. Air Force is going to be an improved squad this year. What are reasonable expectations for the MIDDIES in 2019?

Navy couldn’t get much going on offense last season. The QB play was mediocre and they rushed for fewer than 300 YPG (276) for the first time since the 2012 campaign. They ranked #6 in the AAC (!) in rushing plays of 20+ yards and they are typically at or near the top of the rankings in that particular metric (#1 in 2017 and 2016). The electric Malcolm Perry was moved out of the QB role to help provide explosiveness in the run game (1,087, 7 TD) but that didn’t help the offense enough from an overall standpoint.

Perry returns to the QB position and we are excited to see what he can do in a full season under center. He’s a devastating runner in the open field, but it remains to be seen if he can run the offense efficiently AND stay healthy for an entire season. The RB group is deep but unproven. There’s no doubt Navy will get the ball moving on the ground but time will tell if they have anyone that can get to the edge of the defense and make big plays. The THROW GAME is an afterthought in this offense but they have a few guys that have proven ability to hit the home run. Malcolm Perry needs to improve his accuracy (36% on 25 attempts LY) to the point where he hits wide open receivers a couple of times per game.

We project the Middies to breach the 30 PPG mark once again after the negative blip a season ago (25.0 PPG).

Navy’s defense was a big disappointment last season as they allowed 5.1 YPC on the ground (#10 AAC) whilst doing a bad job defending the pass (68%, #10 pass efficiency D AAC). The 33.5 PPG allowed were the most since 2007 (!). The offense didn’t give the defense as much help as usual and the stop unit had no answer. New DC Brian Newberry (Kennesaw St) has some work to do and just four returning starters to help with the process. Navy will also be without their top-four tacklers from a season ago. The DL figures to improve as they have some experience and size back in the mix but we worry about their ability to generate any kind of a pass rush (10 sacks LY, tied for last FBS) and stop opposing passing games from going absolutely BANANAS.

The best defense might be a better OFFENSE. Keep those chains moving, gobble up clock and allow the defense to face fewer plays. The Middies will be better on defense this year but still look to be a below-average group on paper.

Navy will certainly miss reliable PK Bennett Moehring who nailed an impressive 11/12 three-pointers from inside 50 yards in 2018. They return their primary return men who did a decent job LY as well as senior punter Owen White (36.5 yard net LY).

Overall – There’s an odd setup. They can get off to a quick start (Holy Cross, East Carolina) but have TWO bye weeks in September (?) followed by a run of games in TEN consecutive weeks. Navy only has one home game after October 26.

Potential ATS Trouble Spot – Can’t see one, if only because service academies are often IMPERVIOUS to bad situations and scheduling spots. Tough as nails!

Lean to the ‘over’. It feels more likely than not these guys get to a bowl game.

INSTANT REPLAY made its television debut during the Army-Navy game in 1963.

Before the goat became the official mascot in 1904, other members of the ANIMAL KINGDOM that served as mascots included a gorilla, two cats, a bulldog, and a carrier pigeon. Dazzle the members of the BIKE GANG living next door with that trivia nugget.

We can’t wait to see how these guys perform this year. We have a suspicion that the offense will be back to its usual standards, but it’s hard to project a high overall ceiling for this squad given the way the defense performed in 2018. We are YUUUGE fans of HC Niumatalolo and believe he will figure out a way to cobble together six wins and get to a bowl game. You KNOW we will be cheering for them!

Navy has been a decent ATS play over the last ten years (68-61-2) but have disappointed DEGENERATE NATION in recent times (11-14-1 ATS L2Y). Our suggestion is to pick your spots and BE NOT AFRAID to call their name at the windows when you perceive ‘value’ to be present.