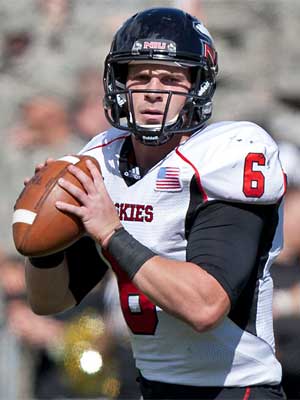 It’s been a while since we’ve seen something this disgusting from the Huskies, but it had to happen sometime. They finished the season with ZIP in the win column, but it’s worth nothing that they didn’t get to play Akron or Bowling Green in conference play. There were a few promising moments as they only lost to Ball St and Western Michigan by a combined 9 points, but it certainly wasn’t easy to be a Northern Illinois fan in 2020.

Let’s see if there’s hope on the horizon.

The Huskies ranked #8 in the MAC in total offense, #10 in scoring offense, and converted a meager 28.57% of their 3rd down opportunities (#10 MAC, #120 FBS). Last season’s starter Ross Bowers had a decent season at QB but moves on, and now it appears it’ll be up to Michigan St transfer Rocky Lombardi to pick up where Bowers left off (NIU 241 YPG passing, #6 MAC). Lombardi was inconsistent with the Spartans LY (53.5%, 8-9 TD to INT) but should appreciate the drop in class to the MAC. The top-two WRs are back in the mix including 1st Team MAC selection Tyrice Ritchie who snagged 53 receptions and booked 4 TDs in just 6g. They’ve gotta find a way to get the ground game going and note that the Huskies have posted a decline in rushing yards per game in four consecutive seasons. The RB group looks to be in good shape with the return of their top-three leading rushers including Harrison Waylee who put up strong numbers in the shortened campaign (456, 4.3, TD). We expect improvement from an experienced and good-sized OL.

Northern Illinois allowed 30+ points in all 6g LY and 40+ on four occasions. They ended up #7 in the MAC in run D and #10 in pass efficiency whilst posting a mediocre 11 sacks (#8 MAC per game). The defense was extremely young LY and they’ll almost certainly benefit from the LIVE BULLETS. Nine of their top 10 tacklers return but they’ll be without excellent LB Kyle Pugh who’s posted 186 tackles during his tenure with the Huskies. We expect some youngsters in the front seven to emerge into legit MAC starters and their secondary is in good shape with the return of S Devin Lafayette and CB Jordan Gandy who led the team in tackles LY whilst breaking up a team-leading 7 passes.

Overall – It feels like a virtual LOCK they’ll start the season 0-3 (at Georgia Tech, Wyoming, at Michigan) but they miss Ohio and Miami Ohio from the East.

No leanage. That looks about right. We think they’ll be an improved team on the field but it might not show up in the win column. 3-4 wins is a reasonable expectation.

The Huskies had an amazing five-year stretch from 2010 to 2014 in which they AVERAGED more than 11 wins per season.

The Huskies weren’t as bad as the 0-6 record indicated last season and they were a very young bunch. We expect a small handful of wins this year but think they’re at least a year away from contending with the BIG BOYS of the MAC West. Their November foes should be on UPSET ALERT as these guys are capable of ruining someone’s season.