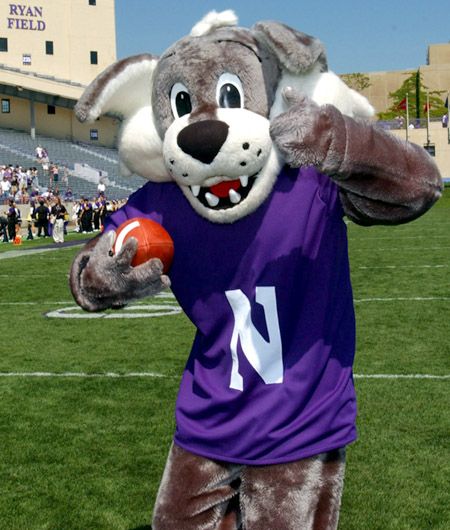 It’s impossible to not cheer for Northwestern. Scrappy team. They win games. Beautiful campus. But, we digress. Last year the Wildcats won their first Big Ten division title in school history as they rattled off seven (!) consecutive conference games to end the regular season. They couldn’t hang with an outstanding Ohio St squad in the Big Ten Championship game BUT they did finish strong by handing Utah a rare bowl defeat in the Holiday Bowl.

Does Northwestern have the MINERALS to win another division crown?

We are excited to see how things go at QB this year. We were fans of the school’s all-time leader in passing yards Clayton Thorson, but now it’s time to usher in the Hunter Johnson era. Johnson was a highly-recruited prospect at Clemson (!) and he brings a ton of potential to the QB room in Evanston. The WR group loses #1 man Flynn Nagel (68, 780 LY), but they still have some experience on hand and don’t forget that Kyric McGowan averaged 17.7 yards per reception a season ago. Isaiah Bowser did a great job at RB for the Cats and racked up 85+ rushing yards in each of Northwestern’s final six regular season games. It’s safe to say that Bowser was a yuuuge reason why the Wildcats won the division a season ago.

We have significant concern about an offensive line that returns just a pair of starters, although it’s good to know that those men are at C and LT. Northwestern somehow won nine games with a group up-front that allowed 36 (!) sacks (dead last Big Ten) and paved the way for a measly 115 YPG on the ground (um, ya. Dead last Big Ten).

Given the new-found raw talent at QB, we expect Northwestern to have a similar (or slightly increased) level of production compared to the prior year (24.2 PPG).

DEVELOPING. Northwestern should be really good on defense yet again. They don’t often WOW you with amazing statistical numbers but they do what matters; stop the other team from scoring too many points. Take note, ADVANCED ANALYTICS GUY.

Northwestern allowed a mere 130 YPG on the ground last year (#4 Big Ten) and are going to be really tough vs the run again in 2019. The DL is tough and features two-time 2nd Team Big Ten DE Joe Gaziano (7.5 sacks LY) while the LB group boasts a pair of stars in Paddy Fisher (3rd Team AA) and Blake Gallagher who led the team in tackles a season ago (127) (!). The soft spot of the defense is the secondary as the Cats allowed 64% completions last year (2nd last Big Ten) and were #11 in the conference in pass efficiency defense.

Cue the CIRCUS MUSIC. Northwestern is going to attempt a FG. They also need to find a new P and the return units are MEH.

Overall – The docket is not kind to a team that often starts slow (see below). Things get REAL in a hurry when they take on Stanford in week one. After a sure win (?) vs UNLV, their next five games are tough Big Ten appointments (Michigan St, at Wisconsin, at Nebraska, Ohio St, Iowa). If they can survive the EARLY ONSLAUGHT they should be able to finish strong.

If you think taking Northwestern to finish under their season win total in ANY year is a safe bet you should give up gambling. Just kidding. Not really. We lean to the over.

The mascot is the Wildcat, a term introduced by the Chicago Tribune in 1924, after reporting on a football game where the players appeared as “a wall of purple wildcats”. Amaze your ADVENTUROUS MASSEUSE with that trivia bomb.

Northwestern was cold as ice in bowl games but are now on a legitimate HEATER winning four of their last five. A joyous sidenote to mention is that while Northwestern is tied for the longest bowl losing skid of all-time (9) they share that distinction with Notre Dame.

Northwestern looks like one of many legitimate contenders in a competitive Big Ten West division. The defense is going to be a rock and their overall prospects will probably come down to the performance of QB Hunter Johnson and the ability to successfully navigate a very difficult first-half schedule. The Wildcats have an annoying habit of getting off to slow starts and they would be well-advised to avoid getting buried in a deep hole to start this campaign.

There’s an old saying that we like to refer to: It’s never a bad idea to get down on some SWEET ACTION when it comes to Northwestern. Last year we SHOCKED THE WORLD and recommended a season win total ‘over’ play and a small wager on them to take down the Big Ten at 60-1. They cashed the ‘over’ but fell one game short of making us billions.

Northwestern hasn’t had a losing season ATS since 2014 and they should be a decent team vs the number once again. Our primary concern is a DEEP Big Ten Conference and their poor ATS record at home (43% L10Y). Our recommendation is to focus on these guys as road underdogs as they boast a 24-9 (!) record vs the point spread over the past ten seasons. That’s 73%, yo. Go Cats!