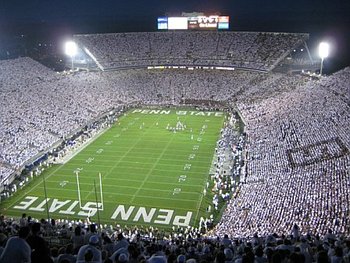 That’s what you call a turnaround, buh buh.

The Nittany Lions started out impossibly-bad losing their first five games. And then the magic happened. They rolled off four consecutive victories and head into this season with some serious momentum. Ya, they beat a bunch of TOMATO CANS, but you have to feel that Penn St will just chalk it up as a lost season and be motivated to dominate in 2021. Let’s go!

QB Sean Clifford was inconsistent LY (61%, 16-9 TD to INT, 335 rush) but we still feel like he can win a lot of games for the Nittany Lions. Time will tell. Clifford loses his excellent TE Pat Freiermuth but gets back his top-two WRs that are really good. Jahan Dotson is one of the best wideouts in the Big Ten (52-884, 17.0, 8 TD LY). The RB group is deep but it’s unclear if they have a lethal #1 option. Bagging John Lovett from Baylor who booked some fine stats as a useful piece with the Bears (1,803, 5.1 17 TD rush career) was a nice addition. The OL is a concern given the loss of two NFL DCs and note that they were 2nd worst in the Big Ten LY in terms of sacks allowed per game. Penn St averaged just 3.9 YPC in 2020.

Penn St allowed 30+ in each of their first four games LY but then BATTENED DOWN THE HATCHES and played well down the stretch. Only one starter returns up front but they get a couple of key additions in DE Arnold Ebiketie from Temple and Derrick Tangelo from Duke. And there’s always a small handful of highly-recruited specimens on board. They look experienced and loaded at LB and are led by #1 tackler Ellis Brooks (5.5 TFL). They have the potential to be better on the back end given the talent at CB but they booked a mediocre 15-4 TD to INT ratio LY. Here’s the deal. Penn St has a great track record of solid D so we’ll call for a much improved stop unit in 2021. To be clear, that’s not a hot take given that they allowed the most PPG in school history LY.

Overall – Yikes. It’s pretty tough. It GETS REAL in a hurry with an opener at Wisconsin but at least they have four straight games at home after that one. The schedule-maker DID THEM DRY by making them face Wisconsin and Iowa on the road. Oh, and they play Auburn, but at least that bad boy is at home. OH WAIT. More CACA. They face Ohio St on the road.

The schedule. The end.

They finished last season on a strong note and we feel very strongly that they’ll be a stronger team overall in 2021. There are just too many question marks to consider them a legit threat to win the East. Schedule? Do they have a legit starting QB? Will the raw talent on D deliver the goods? This feels like a really good but not great squad.