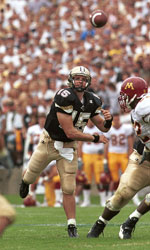 The Boilermakers won their first two contests (Iowa, Illinois) in CLOSE SHAVE fashion and then dropped their final four games the exact same way. Every game on the schedule was decided by one score, other than the season finale loss to CORN (L 37-27). It’s tough to learn much from the 2020 scamdemic season but at least they were competitive. On to 2021.

If HC Jeff Brohm is truly the greatest offensive mind of all time then he’ll figure out a way to get the ground game going. Right? For two straight seasons the Boilers have gained less than 100 YPG (!) with the rushing attack (#124 FBS, #126 in 2019). #1 RB Zander Horvath returns (442, 5.0; 30 receptions) but it’s unclear what kind of depth they have in the room. The good news is that Jack Plummer and Aidan O’Connell both provide legit arms at QB (combined 15-4 TD to INT LY) and they get back their top-two WRs in David Bell and Milton Wright. Losing star WR Rondale Moore is a bummer. Four starters are back up front and they’ll have to step up their game. Bagging guard Tyler Witt from the Hilltoppers should help. There’s potential on offense but they’re likely to be overrated (again).

Purdue was pretty good vs the run LY (#6 Big Ten) but had trouble defending the pass (#12 Big Ten pass efficiency D, 66%). It didn’t help that they had no ability to get PENETRATION (5 sacks in 6G, last Big Ten sacks per game). Three starters are back up front including DE George Karlaftis who showed promise in 2019 (7.5 sacks), and note that he missed time LY. Hopefully they can get a bit more pressure on the QB as a group. Losing LB Derrick Barnes (#1 tackler) to the NFL stings and it’s unclear how good they’ll be in the middle of the defense. The secondary should be improved with the return of three starters and the addition of DB Jamari Brown from Kentucky. They’ll need assistance from an improved pass rush.

Overall – They have a sneaky-tough opener with Oregon St (H) and have to travel to South Bend in non-conference action. They draw a road test with Ohio St.

This will be their 3rd road game in four weeks and the Cats can RUN TO THE BALL on defense. Rivalry game with Indiana is on deck.

That looks about right. It feels like a 50/50 shot to gain bowl eligibility.

It feels like a mixed bag. The THROW GAME should work just fine but we’re still not sure they can be balanced on offense. The defense could be better than we think, particularly up front. The schedule is a bit rough and we’ll call for 5-6 wins.