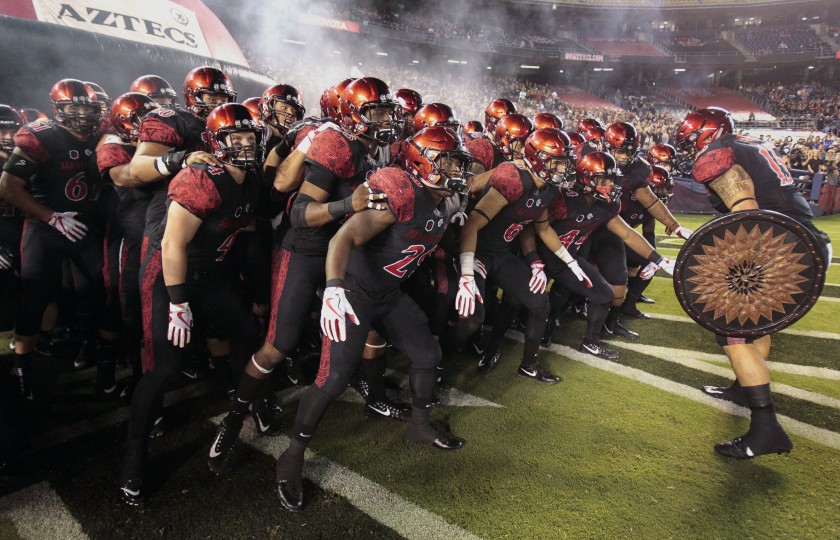 The Aztecs got off to a quick 2-0 start with a pair of wins over TOMATO CANS (UNLV, Utah St) but were taken down in game three by the emerging JUGGERNAUT San Jose St Spartans. They only managed to win two more games the rest of the way and finished up with a disappointing mark of 4-4. To be fair, it was a strange season. Let’s see how things are shaping up in 2021.

The Aztecs were able to grind out some yards on ground LY (199 YPG, #3 MW) but couldn’t get any kind of a THROW GAME going to keep defenses honest. They’ve only managed to average 351,343 and 349 YPG over the past three years and things need to improve if they wanna get back to the top tier of the conference. The QB battle will likely go well into fall camp and the starting gig is up for grabs. The main contenders are a couple of doods from LY’s QB room (Lucas Johnson, Jordon Brookshire) as well as highly-touted Miss St transfer Jalen Mayden. The excellent RB group is back including #1 Greg Bell who’s one of the best in the Mountain West. He started out on SUPAH HOT FIRE booking four consecutive 100-yard games (111,157,109,160) before getting banged up. The depth behind him is MUCHO IMPRESSIVE. It’s hard to know what they have in terms of THROW GAME weapons given the mediocre QB play but everyone returns including #1 WR Jesse Matthews and TE Daniel Bellinger who snagged 20 receptions LY. Adding some SEC talent (Tyrell Chavers) may help. The Aztecs want to open things up and have a more efficient passing attack but COLOR US SKEPTICAL. Three starters return up front and they have decent size and over 60 career starts.

The Aztecs have been ROCK SOLID on defense over the past two years and in 2020 they allowed a mere 284 YPG (#3 FBS) and just 98 YPG on the ground (#7). There might be a bit of trouble on the horizon as San Diego St must deal with yuuuuge losses in the secondary. Star CB Darren Hall is off to the NFL (Falcons) and #1 tackler safety Tariq Thompson also departs. They always seem to have talent back there but those are two tough guys to lose. #2 tackler LB/Aztec Dwayne Johnson will also need to be replaced. Thankfully, the starting DL returns intact including 1st Team MW honoree DE Cameron Thomas (4 sk, 14 QBH LY) and LB Caden McDonald is one of the best in the conference at his position (10 TFL, 10 QBH LY). This is still one of the best Ds in the Mountain West.

Overall – The schedule doesn’t look too bad BUT note that they’re playing their home games in Carson, CA (>100 miles away).

It’s never easy to play Hawaii on the road when they’re half-decent and this will be the Aztecs’ 3rd road game in four weeks.

The defense and rushing attack should be good enough to get them to seven wins.

Per the fine folks at College Football News, The Aztecs are on a 30-0 (!) run when booking 4+ sacks.

You can say this about a lot of teams, but for San Diego St, it’s really true. They HAVE to get better play at the QB position. The defense, rushing attack, and special teams should be fine but they’ll some kind of a THROW GAME to put them over the top. Definite contender in the competitive Mountain West.