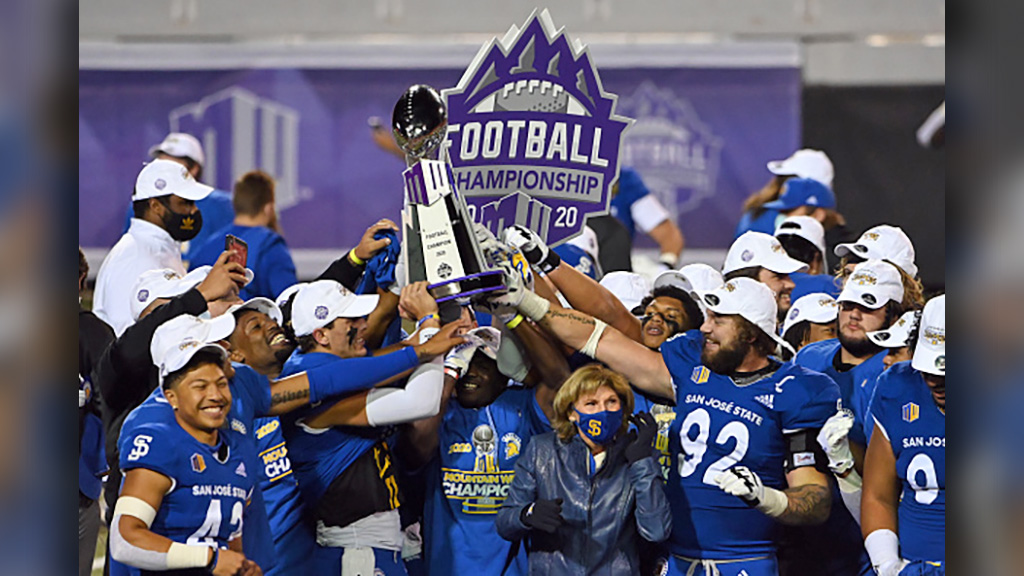 The Spartans SHOCKED THE WORLD and ripped through the Mountain West schedule in UNDEFEATED FASHION on the way to a conference championship. They did it in legitimate fashion by beating San Diego St (A), Hawaii (A), Nevada (N), and Boise St for all the marbles (N) (W 34-20). It was a Cinderella season that was one of the highlights of the 2020 college football season, despite the fact that they fell to Ball St in the Arizona Bowl.

What can they do for an encore?

The Spartans rode an effective THROW GAME to a MW title and they did it with an interesting QB combo that’s back in 2021. Nick Starkel completed 64% of his throws (17-7 TD to INT) whilst Nick Nash provided more of a rushing element to the position (204, 5.1, TD). There is a yuuuuge question mark at WR as they lose their excellent WR combo (Gaither, Walker) that combined for over 1,300Y and 8 TDs in the shortened casedemic season. They’ll rely on some youngsters to emerge at the position as well as their excellent TE Derrick Deese who’s freakishly talented (20-240, 12.0, 5 TD; 6’4 250). San Jose St did enough on the ground to give teams problems and they bring back their top-two at RB including Tyler Nevens who averaged 7.8 (!) YPC LY. The OL returns five starters including 1st Team MW LT Jack Snyder and note that they allowed just 8 (!) sacks LY.

San Jose St underwent an EPIC TRANSFORMATION on defense LY and allowed just 19.9 PPG and 346 YPG after allowing 31.9 and 444 respectively in 2019. They also led the conference in sacks with 26. Ten starters are back on this side of the ball including everyone up front. They have one of the best DE combos in the nation in Cade Hall (10 sacks, T3 FBS) and Viliami Fehoko (6 sk, 12.5 TFL) and good size at NT. The entire starting LB corps returns including #1 tackler Kyle Harmon and the Spartans should be really tough vs the run once again, whilst also putting enormous pressure on opposing QBs. They’ll look to improve a bit vs the pass as they picked off just three passes LY and allowed 62% completions. This will be a nasty defense once again.

Things look pretty good with the return of PK Matthew Mercurio (7/9 FG LY) and the addition of P Will Hart from Michigan (!). San Jose St was #4 in the FBS in KR in 2020 and they returned a pair for TDs. The responsible parties are back.

Overall – The road date at USC is tough and it won’t be a FREE SQUARE when they take on the Broncos in KALAMAZOO. Things get real in a hurry in MW action when they face Hawaii on the road on September 18th. They get three of their final four games at home.

They play in Hawaii on September 18th and take on Western Michigan a week later approximately 860,000 miles away. The Broncos can SCORE THE FOOTBALL.

The only game that appears to be “unwinnable” is the date with USC. This team doesn’t have a significant weaknesses.

TREND GUY was overwhelmed with confusion when the Spartans upset Boise St to win the Mountain West Championship Game. San Jose St was previously 0-14 vs the Broncos.

Brent Brennan has turned this program around in quick and impressive fashion. The Spartans were just 3-22 (!) in his first two seasons but turned themselves into CHAMPS by year four. They won’t sneak up on anyone this year but they still boast one of the best rosters in the conference and are more than capable of some SWEET REPEAT ACTION.