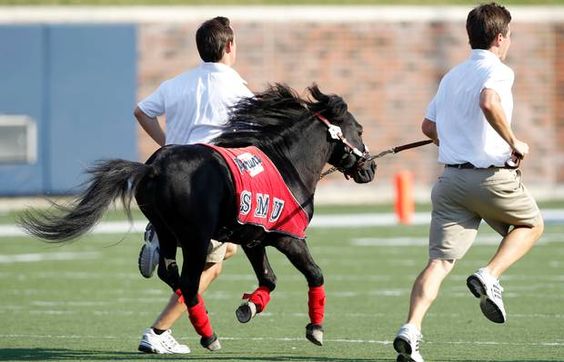 SMU started out slow losing their first three games to North Texas, TCU and Michigan. They played well the rest of the way and only lost to some other really good squads (UCF, Cincinnati (OT), Memphis). All they had to do to make a bowl game was beat the Tulsa Golden Hurricane in the regular season finale. What could possibly go wrong? Well, Tulsa handed them a 27-24 defeat and that meant both teams were home for the holidays.

HC Sonny Dykes returns a talented and experienced roster. Let’s find out what kind of upside the Mustangs may have this year.

The Ponies were expected to be a bit more potent on offense last season (387 YPG, #9 AAC) but were inconsistent for most of the campaign despite having a really good QB. Ben Hicks leaves the program as their all-time leading passer, but there is great news in the form of Texas transfer Shane Buechele who is penciled in as the new starting QB. Buechele walks into a good situation as he has the most potent WR group in the conference to utilize in the THROW GAME. These guys are going to drive opposing secondaries crazy. James Proche was a 1st Team AAC performer LY (93-1,199, 12.9, 12 TD) and Reggie Robertson emerged as one of the best #2 options around (802, 15.4, 6 TD). A healthy CJ Sanders (former Notre Dame product) will make this group even more dangerous. The rushing attack is what failed them last season (116 YPG, dead last AAC), but the hope is that they can do a better job in 2019. We have hope that the 1-2 combo of Xavier Jones and Ke’Mon Freeman can TOTE THE ROCK effectively and often enough to keep the defense guessing, but we will need to see it for ourselves after what transpired a season ago. The OL should do a better job in year two of the new offensive system with three returning starters in the fold.

We project about a 10% increase in scoring output (30.4 PPG LY) and total yardage (387 YPG LY) with more upside if the offensive line is able to make significant strides. <grabs popcorn>

If the Mustangs are ever going to become contenders in the AAC they must get better on defense. They have yielded 33+ PPG every year since the 2013 season, but hope is on the horizon. SMU has nine starters returning to a stop unit that allowed 4.3 YPC LY (#6 AAC) and was #6 in the conference in pass efficiency defense. Nothing to brag about, but at least they have something to build upon. The DL play should be solid this season as they return four starters to the front with lots of size and experience. The LB group will miss star performer Kyran Mitchell (#2 tackles LY, 15 TFL) but bring back a pair of solid seniors including Richard Moore who led the Ponies in tackles a season ago. THE HITS KEEP COMING! The secondary boasts three returning starters and should benefit from a stronger front seven.

SMU allowed an UNSEEMLY 35.3 PPG LY but a lot of that carnage was not yielded by the defense (special teams, offense giving up defensive scores). We have a sneaky suspicion that the Mustangs will be much better on this side of the football.

There is continuity across the board and some fine performers back in the mix. PK Kevin Robledo was 11/14 on FG attempts last year and punter Jamie Sackville had an acceptable 36.6 yard net. James Proche does a good job on PR and KR, and don’t sleep on Reggie Roberson who took a kickoff to the HOUSE (98 yds) in 2018.

Overall – It’s going to be challenging, particularly on the road where they face TCU, USF, Houston and Memphis. Even the opener at Arkansas St is no picnic. SMU doesn’t have a sparkling road record over the past ten years (17-41) so it will be interesting to see how they fare.

This is a SANDWICH GAME of sorts as it comes between games with more prominent in-state competitors (North Texas, at TCU). The Mustangs will most certainly be laying a ton of points and not sure we are interested in laying that kind of wood in this spot.

LEANAGE to the ‘over’. This has the look of a team good enough to get to six wins or beyond.

During the 1948 season, the Mustangs won their seventh conference title, posting a 9–1–1 record. They played the OREGON WEBFOOTS in the Cotton Bowl and notched their first bowl game victory (W 21-13).

This should be a fun team to watch. We have high expectations for Shane Buechele and the passing game and expect the defense to help out more than last year. As noted above, they haven’t exactly been ROAD WARRIORS in recent times, and they will need to start bagging wins outside of Dallas if they plan on making serious noise in the division.

This team is a much-improved on paper and should fly under-the-radar on many occasions. We’ll be sure to keep these guys in mind when crafting our weekly wagering card.