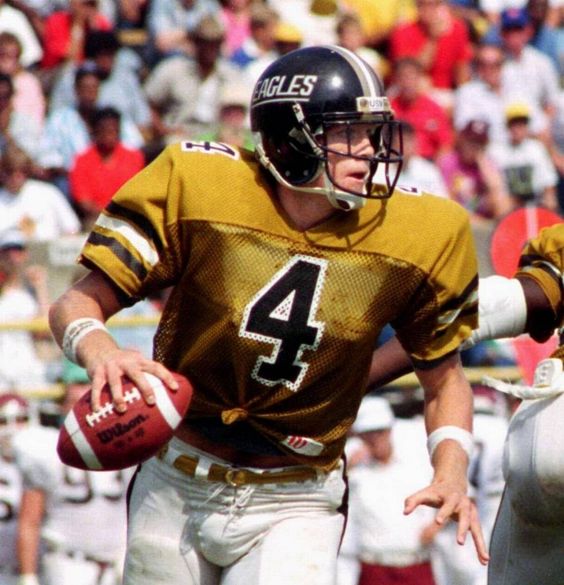 The Eagles got off to a slow start winning three of their first six games and that ultimately cost them a return trip to bowl season. They finished the year in good form beating Marshall and Louisiana Tech, and don’t forget they lost to UAB on the road by a mere field goal.

That makes it three consecutive winning seasons for head coach Jay Hopson. Let’s find out if the Eagles have what it takes to challenge for a Conference USA title.

The Eagles were ranked #9 in Conference USA in total offense last year (368 YPG) and that marked the third consecutive annual decrease in yardage and scoring output. New OC Buster Faulkner comes over from Arkansas St and should be able to get things rolling based on the talent coming back on this side of the ball.

QB Jack Abraham led the FCS in completion percentage last year (73%) (!) but threw a few too many picks for our liking (15-10 TD to INT). In any event, he promises to be one of the better signal-callers in the conference and don’t forget they can mix things up with a true running threat in QB Tate Whatley. The WR group is one of the best in the conference and they return their top-five from a season ago. Our CONFERENCE USA INSIDERS advise to keep an eye on the status of #1 wideout Quez Watkins who is attempting to get his academics in order before the season starts. The Golden Eagles look to have a decent RB rotation that will be running behind an OL that brings back five starters and over 100 career starts. The offensive line was a disappointment last year (3.1 YPC, 33 sacks allowed) and they will really make things hum with improved play.

We project the Golden Eagles to crack the 30 PPG barrier for the first time since 2016.

Southern Miss is coming off a year in which they played some phenomenal defense. They were #1 in Conference USA in total defense (#3 FBS, 278 YPG) and #2 in scoring defense allowing a measly 19.8 PPG. Six starters return to the stop unit and they look very strong up front and in the secondary. DE Jacques Turner was great last year bagging 10 TFL and 5 QBH whilst garnering 1st Team C-USA honors, and they have good size on the interior of the line. The secondary was impressive in 2018 booking a 13-14 TD to INT ratio and yielding just 53.4% completions. Needless to say, they were the #1 pass efficiency defense in the conference. They return three starters to the back-end of the defense including a pair of solid CBs and 2nd Team C-USA selection FS Ky’el Hemby. The LB group looks a little thin with the loss of leading tackler Picasso Nelson, but you can’t have everything.

The stats were eye-popping in 2018, and while they are unlikely to match those impressive numbers, we still view this as one of the top defenses in C-USA.

The Golden Eagles are going to miss their excellent PK Parker Shaunfield who nailed 16/20 three-pointers in 2018. The rest of the group looks average across the board, although we do note that Quez Watkins bagged a PR TD last season. It’s another reason to track his eligibility over the summer.

Overall – Yikes. After opening with a sure-to-be SMASHING of Alcorn St, they take to the road for three straight brutal tests. Mississippi St, Troy, and ROLL TIDE. OH MAMA. The good news is that they start conference play with UTEP and get two of their three main division rivals at home (UAB, North Texas). You want intrigue? Their final regular season tilt is a road trip to Florida Atlantic to take on the FIGHTING KIFFINS. That game should have big-time implications. <grabs popcorn>

They will be laying a big number and this game is sandwiched in-between their three most important conference games.

That feels like an accurate representation of their prospects. We really like the roster, but the road games are going to be a tough test.

Southern Miss and Louisiana Tech first played in 1935 and played each season from 1946 until 1972, and eleven times from 1975-1992. Their battles are now known as the Rivalry in Dixie, a phrase coined by former Louisiana Tech coach Maxie Lambright after a 23-22 win over Southern Miss in 1976. “This is the finest rivalry in Dixie”, was the quote that sparked the new tradition.

Southern Miss last won the Conference USA title back in 2011 and finished the year with an impressive mark of 12-2.

We hope the Golden Eagles can survive the rough patch to start the season. Those are some nasty non-conference games to navigate. If they can come through the other side without too many injuries and then take care of UTEP, they get a bye week and a chance to refocus for the remainder of the year. There’s not much to pick at with this team. It’s a very well-rounded squad and you know we love ourselves some good defense.

Southern Miss has been a 50/50 proposition from an ATS perspective under HC Jay Hopson. We’ll take a neutral stance for now but plan on calling their name a few times at the betting windows once the calendar turns to October.