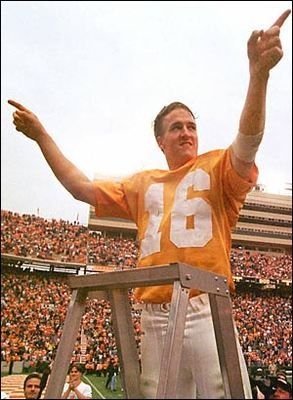 Year one of the Jeremy Pruitt era went fairly well, particularly when you consider that expectations were low, and they came within one win of making a bowl game. Darn those RASCALLY Commodores! They did have one memorable moment when they were able to SHOCK THE WORLD and bag a road win over Auburn as 14-point underdogs. Yes, guy.

Let’s examine what’s in store for the Vols heading into the 2019 season.

We can’t sugar-coat things. The Volunteers have been ABYSMAL on offense in each of the last two seasons posting a meager 22.8 PPG LY (#13 SEC) and a laughable 19.8 PPG in 2017 (dead last SEC). Good news may be on the horizon. The Volunteers return 10 starters on offense including QB Jarrett Guarantano who is poised for a breakout junior season (62%, 12-3 TD to INT LY). The Vols should be able to MATRICULATE the ball down the field effectively in the passing game as the entire WR corps returns for duty. They possess a fine combination of size and the ability to stretch the defense. Our SEC RB UNIT INSIDERS really like the 1-2 combo of Ty Chandler and Tim Jordan (combined 1,152 yards, 7 TD LY) and they may have a SURPRISE PACKAGE in freshman Eric Gray. The offensive line has had a tough time run blocking over the past two years but they do bring back four starters and should be much improved.

New OC Jim Chaney has some nice tools to work with and we project the Vols to be a lot better on offense this year. 30 PPG is not out of the question.

The Volunteers were a bit better on defense last year in the first season under defensive-minded HC Jeremy Pruitt. They allowed fewer PPG (27.9 vs 29.1 in 2017), fewer YPG (377 vs 413), and tallied more sacks (25 vs 22). The bad news? They still yielded 36 PPG in SEC play (#12 SEC) and only return six starters to the stop unit in 2019. The DL doesn’t have a single returning starter but they have nice size and plenty of raw talent. And we know that Jeremy Pruitt can COACH EM UP. Senior LB and last year’s leading tackler Daniel Bituli leads a decent-looking LB group and the secondary has three really promising returning sophomore starters. The Vols yielded over 60% completions last year (63.0%) for the first time since 2012 (!) and we feel they will be a lot better vs the pass in 2019. Having said that, it would be nice to see them get more pressure on opposing QBs as they only managed 25 sacks LY (#11 SEC).

The Vols have allowed between 27.9 and 29.1 PPG over the past three years and we forecast them to come in at the bottom of that range this season, or maybe even a bit lower if they can get that sack total up and create more negative plays. <grabs popcorn>

Overall – The Vols are a MORTAL LOCK to win at least two of their first three games (Georgia State, Chattanooga) but the home date with BYU is not going to be a FREE SQUARE. They will fight you for 60 minutes (and beyond, if necessary).

This game follows their two most important SEC tilts (at Florida, Georgia) and also comes before a meeting with Jeremy Pruitt’s old employer ROLL TIDE.

Hmm. We like the look of this team and lean to the ‘over’. Just not crazy about the price tag. Shop around and see if you can find an option with lower juice.

Tennessee’s last division title came back in 2007. They lost in the SEC Championship to the LSU Tigers by a score of 21-14. They last won all the SEC marbles in 1998 when they defeated Mississippi St (W 24-14), and recall that was their second title in a row after defeating Auburn 30-29 the year before. The QB vs Auburn? The great PEY PEY.

PLEASE. Somebody in the SEC East take up the challenge and become the legitimate THIRD WHEEL. South Carolina and Missouri have had a window. Kentucky came close last year but may not have the staying power. Tennessee has the raw talent to be a tough out in the SEC, although to be fair, they are probably a year away from doing really good (or great) things.

The Volunteers have been a MONEY BURNER over the past ten years posting an ATS mark of 54-70-1 (43.5%), and they have not had a winning season vs the number since 2015. After a pair of dismal campaigns we feel the Vols have a shot to make us some CASH as they possess a tasty combination of underrated talent and flying under-the-radar. Let’s go!