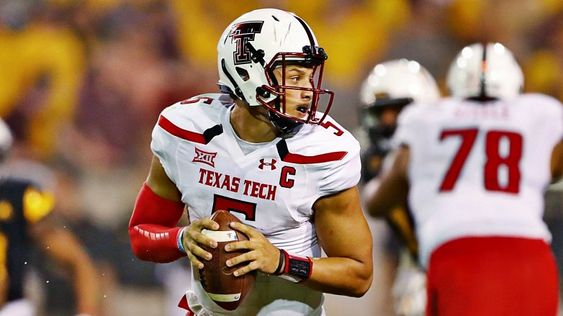 The Red Raiders fell into a DEATH SPIRAL after starting the season at 5-2 and that record included road wins over Oklahoma St and TCU. The fiasco of unfortunate QB injuries ultimately led to their undoing as they lost the final five games of the regular season and missed out on bowl game action.

Out goes the BEEFCAKE, Kliff Kingsbury. In comes new HC Matt Wells who turned Utah St into a JUGGERNAUT. We love the hire, but how quickly can he get things rolling in Lubbock?

The QB position is still critical in the new offense and the Red Raiders are well stocked. QB Alan Bowman looked really good last season (69%, 17-7 TD to INT) before succumbing to more than one injury including a collapsed lung. Bowman is just a sophomore and we love his upside. We are also fans of back-up Jett Duffey who did good work and showed us a lot in the 2nd half of their loss to Oklahoma (L 51-46, but a 888 STAR MEGALOCKS BIG 12 LOCK OF THE MILLENNIUM winner). The passing attack should be just fine even with the departure of their top-two receivers from a season ago. TJ Vasher and Seth Collins are fine options and they add in a couple of solid transfers including WR McLane Mannix from Nevada (50-875, 7.5, 7 TD LY). The rushing attack may take some time to get rolling with the move away from the pass-happy offense of seasons past, but at least the Red Raiders can rely upon a good-looking offensive line that returns four starters and good size across the board.

The scoring output will be down this season but we look forward to seeing the Red Raiders do damage with a more balanced attack.

The Red Raiders are starting to show some teeth on defense (by their standards) and have allowed around 30 PPG in each of the past two seasons. The run D has been pretty good and they managed to tally a respectable 28 sacks LY (T6 Big 12). New DC Keith Patterson comes over from Utah St and has six returning starters to work with including a few stars. LB Jordyn Brooks is a two-time all-Big 12 performer who is coming off a campaign in which he led the team in tackles and TFL. FS Adrian Frye was a 1st Team Big 12 honoree who tallied 13 PBU and 5 INT in 2018. The DL moves to a three-man base and should be just fine.

It’s not a shut-down defense but good enough to get some key stops and help this team have a successful 2019.

This might be a bit of an adventure. The entire group needs to be replaced including their PK and P.

Overall – We like the look of things. They start out with a pair of virtual exhibition games (Montana St, UTEP) and then head on the road for a winnable game at Arizona. They don’t have any back-to-back road games in Big 12 play but do have to travel to Oklahoma and Texas.

That number looks about right, although we will say that the ‘over’ looks more tempting.

The Masked Rider is Texas Tech University’s oldest mascot and was the first official mounted mascot in the country. The tradition began in 1936 when “ghost riders” were dared to circle the field prior to home football games.

We’re very interested to see if Texas Tech can start to consistently challenge in the Big 12 under new HC Matt Wells. It’s never easy in the first season of a transition year but there are many talented pieces on the roster. They may be a year away from doing serious damage but should be fun to watch.

It wouldn’t be a stretch to put them in a mildly-positive light from an ATS perspective but there is too much change happening for our tastes. We are VERY intrigued to see how quickly things come together and may just back them at the windows more than once this year. Stay tuned.