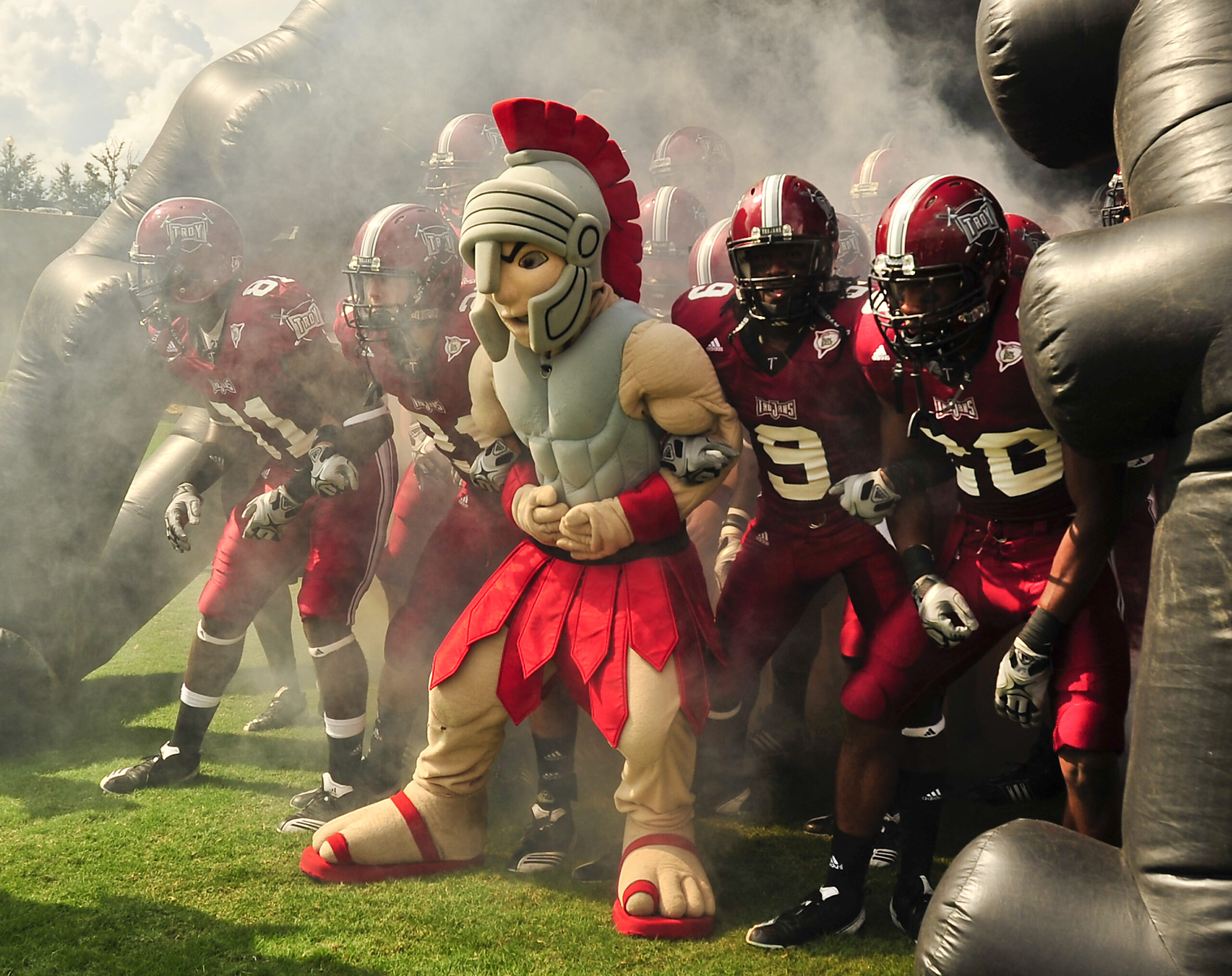 The Trojans started out in good shape winning four of their first six games, and that included BLOWOUT wins over MTSU, Texas St, and Arkansas St. Not exactly MURDERERS ROW, but wins are wins, buh buh. They struggled down the stretch and lost four of their final five games BUT did give the JUGGERNAUT Chanticleers a run for their money (L 42-38).

Let’s see how the roster shapes up heading into 2021.

The Trojans were one-dimensional on offense LY (#117 rush, #21) and it’s really difficult to win when the ground game is that pathetic. They have a pair of capable QBs in Gunnar Watson and Jacob Free (combined 22-12 TD to INT LY) to build the offense around and add an interesting QB transfer in Taylor Powell from Missouri. Keep an eye on fall camp and see how things develop. Sadly, Troy loses three of their top four pass catchers from the 2020 squad. WR Reggie Todd led the team with 6 TD receptions but they’ll likely have to rely on JUCOs and youngsters to emerge in 2021. We expect a MUCH improved performance from the RB room as five starters return for an OL that boasts really good talent at C (Dylan Bradshaw) and LT Austin Stidham. The RB unit itself is extremely deep with the return of #1 rusher Kimani Vidal (516, 4 TD) and note that BJ Smith had over 1,100 yards rushing in 2018, and DK Billingsley rushed for 901 yards in 2019. Expect a more balanced attack in 2021.

The stop unit was decent LY as they ended up #5 in the Sun Belt in both total defense (405 YPG) and scoring defense (25.7 PPG). Their top-12 tacklers are back on this side of the football including the entire starting front seven. They have a legit star in LB Carlton Martial (1st Team Sun Belt) who led the team in tackles (113) (!) as well as TFL (10) LY and DT Will Choloh is a force inside (7.5 TFL). The front seven also features DE/LB Richard Jibunor ( 7 TFL, 5 QBH) as well as a few P5 transfers. Three starters return in the secondary and they’ll need to do a better job. They’ve allowed 67.0% and 66.5% completions the past two years. An improved pass rush would help (22 sacks LY, #4 Sun Belt sacks per game).

Yikes. They’ll need to replace their excellent P Jack Martin who left to win championships with ROLL TIDE and have to find a new PK.

Overall – They have a shot to start the season 3-0 in non-conference action but will have to get by a tough Liberty squad in week 2. At least they get them at home. They have a 5/6 game road stretch (!) starting in week 3 and have to face Coastal, Louisiana and Appalachian St in a four week span.

This is a rivalry game (BATTLE FOR THE BELT) and is sandwiched between two yuuuge match-ups (Chants, Cajuns).

The Trojans lost four games last year by a TD or less, and three of those came vs solid squads (Georgia St, Georgia Southern, Coastal Carolina).

This is an interesting team playing in a very competitive and improving division. They don’t appear to be good enough to take down the division but they’re MORE than capable of SHOCKING the WORLD at least once during the campaign. See you in bowl season.