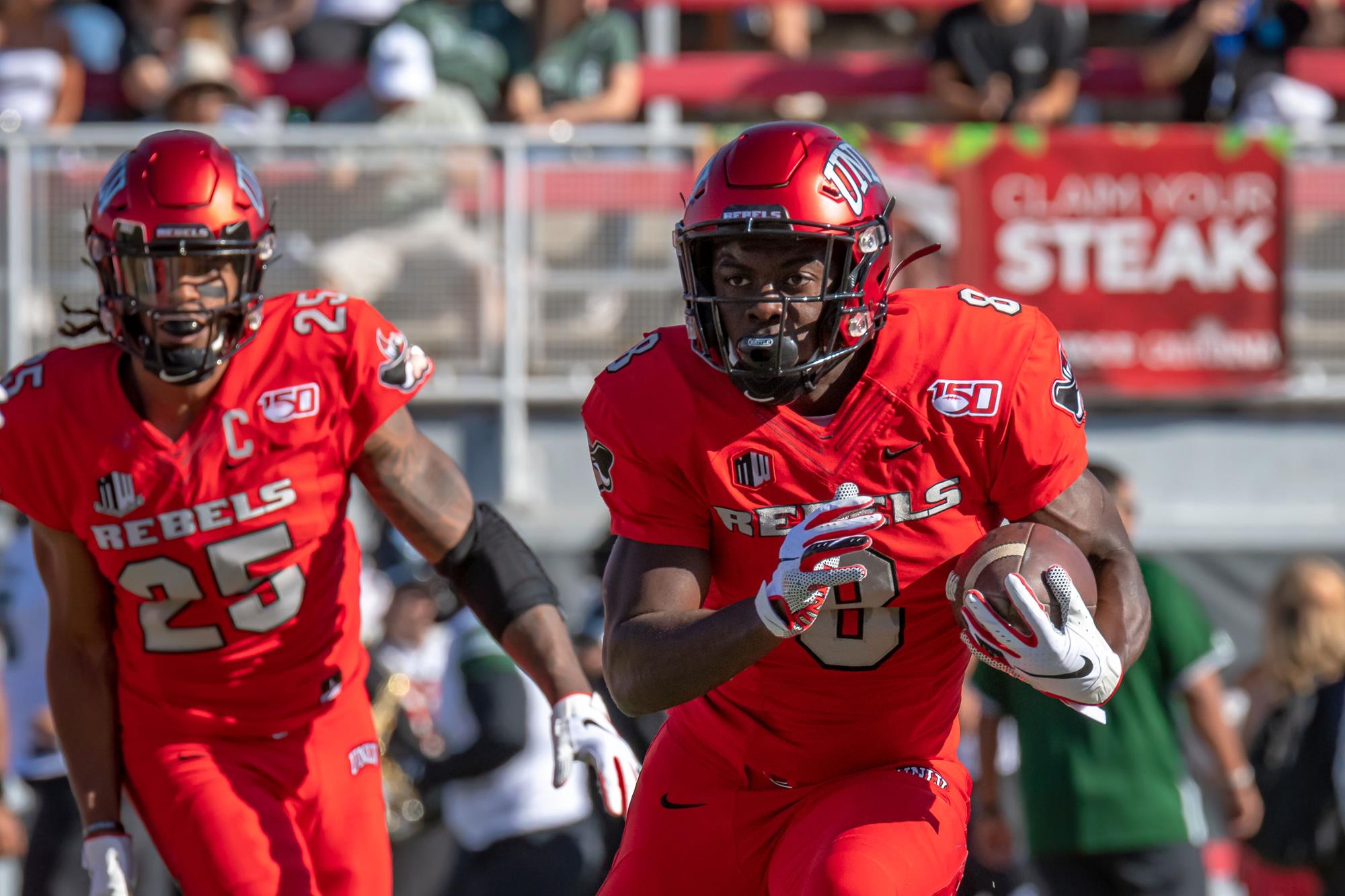 We’re not sure what a BLOODBATH looks like but the 2020 scamdemic season was not kind to the Rebels. They didn’t win a game all year whilst being outscored to the tune of 228-104. We knew it would be a rebuilding “year” but it’s still hard to take many positives from last season’s DEBACLE. Let’s see what HC Marcus Arroyo can do in his first full season in Vegas.

The Rebels couldn’t get anything going LY and only scored 20+ points in two of their six games. The good news is that is wasn’t a complete LOST CAUSE as they got acceptable production on the ground (145 YPG, #6 MW), and #1 RB Charles Williams returns for what seems like his 9th year at UNLV. Don’t forget that Williams booked 1,257 (!) yards rushing in 2019 so he’s a fantastic piece to build around. The 789,000 dollar question is what can we expect at the QB position? This is a PUZZLER that has confused handicappers since the reign of the MING DYNASTY.  Neither Doug Brumfield or Justin Rogers have much experience so we’ll see what happens. Essentially anyone that caught a pass is back this year and they’ll feature WR Kyle Williams (35-426, 2 TD) in the THROW GAME. The OL is a major concern and we’re hoping they can do a better job of protecting the QB (29 sacks allowed, LAST MW/game). It’s hard to get too excited given the questions at QB and OL.

Last season’s offense was pathetic but the defense was worse. They allowed 38 PPG and an unseemly 255 YPG on the ground (#122 FBS). Opponents scored 34+ points in every game. The Rebels will hope that a move to a 3-4 alignment will play dividends in 2021 as the LB group looks pretty decent with the return of their top-two sack men Adam Plant (3.5, 7 TFL) and Jacoby Windmon (5, 6.5 TFL). They’ll need to improve up front but at least the have decent size and they add USC transfer Connor Murphy who should grab a starting gig. The secondary is experienced but they’ll need to force more turnovers (2 INT, 6G), and they would be greatly assisted by an improved pass rush (14 sacks, #9 MW sacks allowed per game).

Things don’t look special by any means, but they do have continuity in the kicking game with the return of PK Daniel Gutierrez (5/6 FG) and P Charlton Butt (37.0 net).

Overall – There are a small handful of winnable games and they miss Boise St. On the other hand, they play in a nasty division and get Arizona St (A), Iowa St (H), and UTSA (A) in non-conference play.

This will be their 3rd road game in four weeks and it’s in the middle of a pair of Mountain West games.

They’ll most likely have to win two of the three “winnable games” (E Washington, New Mexico, Utah St) or pull a major upset along the way. Not impossible.

The UNLV football program has a relatively short history having began in September of 1968. They joined a conference for the first time in 1982 (PCAA – Pacific Coast Athletic Association). The PCAA changed its name to the Big West in 1988.

This is clearly a program in the early stages of a rebuild and it’ll be interesting to see what HC Marcus Arroyo can do in his first full season. They have a legit star at RB and some interesting pieces scattered over the roster but they’ll struggle to win more than a game or two this year. In any event, GO REBELS!