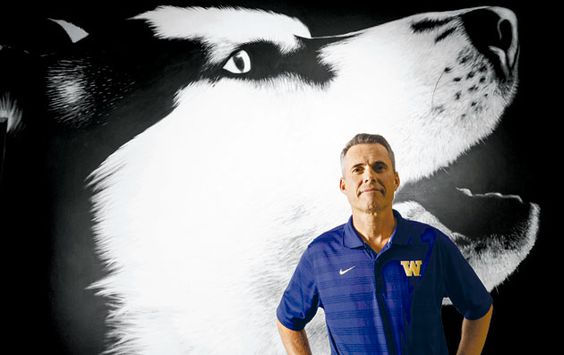 The Huskies booked another fine season under the watch of HC Chris Petersen as they won ten games and a PAC-12 Championship. That makes three consecutive double-digit win seasons and their second conference crown in the past four years. Their four defeats were by a combined 15 points and that included a Rose Bowl loss to powerful Ohio St.

It’s a sign of a top-notch program when there was disappointment over missing the college football playoff. Let’s see what’s in store for Washington this season.

It’s never good when you lose the school’s all-time leader in passing yards who was a four-year starter. Jake Browning was not flashy but we loved his leadership and ability to lead his team to WINS. Like any good program, the Huskies have a good plan for the upcoming season as Georgia transfer Jacob Eason comes in to run the show. Eason attended nearby Lake Stevens High School and has a LASER ROCKET ARM. It remains to be seen what kind of impact he can have in year one with the Huskies but there is definitely reason for excitement. If nothing else, Eason should enable the offense to do a better job of stretching the field vertically.

It seems crazy, but the Huskies also lose their all-time leading rusher in Myles Gaskin (1,268, 12 TD LY). Salvod Ahmed seems ready to step into the role of #1 RB as he rushed for 608 yards a season ago whilst averaging 5.8 (!) yards a pop. They also have some intriguing options on the depth chart behind Ahmed. Eason will be pleased to know that they return their top-3 WRs as well as TE Hunter Bryant who averaged over 20 yards per reception on 11 catches a season ago. The offensive line is in great shape as they return a ton of experience (4/5 starters) and a star at LT (Trey Adams).

The Huskies averaged just 26.4 PPG last season but we expect them to exceed the 30 PPG plateau in 2019.

You must have known it couldn’t be a complete bed of roses.

The defense has some major retooling to do as they bring back just a pair of returning starters and only one of the top seven tacklers return for duty. Washington had the #1 ranked defense in the conference last season (306 YPG) but will need some new faces to step up in order to stay close to that ranking. The DL returns just one starter and loses a pair of key contributors from a season ago. The LB corps will miss their incredible tackling machine Ben Burr-Kirven who led the FBS in tackles last year with an amazing 176 (!). They also lose almost every important piece from their secondary including a significant amount of NFL talent.

It’s hard for anyone to predict how the new pieces will come together this season. They have a lot of highly-regarded recruits on hand but is it really reasonable to expect everything to come together right away? We think this defense will rank in the top-third of most PAC-12 statistical categories but down a slight notch this year.

Hmm. Feels like a below-average group on paper based on who is returning to the mix. The return units performed poorly last year as did P Joel Whitford (34.1 yard net). PK Peyton Henry was just 7-12 on FG attempts of 30+ yards. Our PAC-12 INSIDERS advised us to keep an eye on freshman PK Tim Horn out of Hawaii.

Overall – It’s definitely favorable. They start out with three winnable home games and get Oregon and Washington St at home. Their out-of-conference slate is manageable with the only non-layup being a road test at BYU on September 21.

This contest takes place after back-to-back games vs USC and Stanford. Oh, and the key match-up with Oregon is on deck. The road team has won eight of the last nine meetings in the series. Not saying, just saying.

Lean to the under. It’ll be tough to bag ten wins with a new QB and nine new starters on D, whilst competing in an improved PAC-12.

Washington played college football from 1889 to 1915 as an independent. In 1916, Washington became one of the four charter members of the Pacific Coast Conference (PCC), which is now known as the PAC-12.

The Huskies boast a fine 24-5 record vs PAC-12 teams over the last three seasons.

This season should be really interesting. Can the Huskies keep the train rolling with such significant turnover? They have lost a lot of talent on defense, not to mention the school’s all-time leaders in passing and rushing yards. Washington is still the team to beat in the PAC-12 North BUT there will be at least a couple of teams hot on their heels.

When it comes to beating the Vegas number, the Huskies are a .500 ATS squad (34-34) under the tutelage of HC Chris Petersen. We recommend picking your spots carefully. The POWER MOVE may be to look to the ‘over’ from a totals perspective given their losses on D and the returning firepower (and new strong-armed QB) on offense.