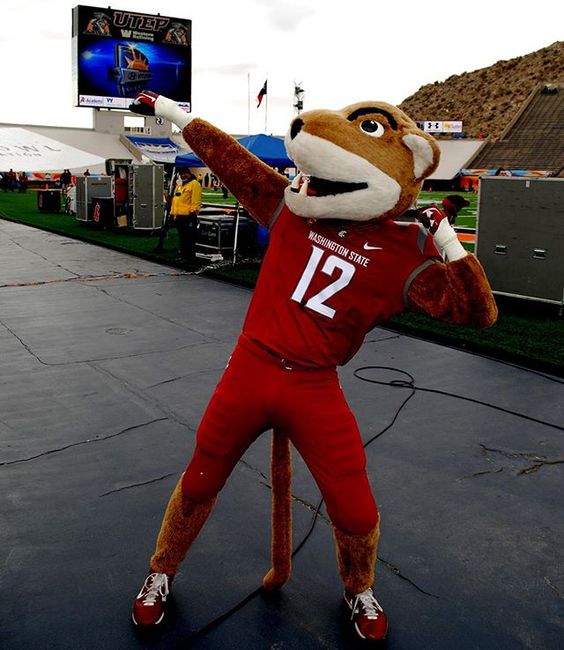 The Washington St Cougars are one of the more underappreciated teams around. They just bagged 11 wins for the first time in school history and have tallied 37 victories over the past four campaigns. Of course, there is still some disappointment in the air as the Cougars lost in the Apple Cup (again), and that makes nine defeats at the hands of the Washington Huskies in the last 10 years. Argh.

It’s hard to believe that Mike Leach is entering his eighth season in Pullman. Time flies. Is this the year the Cougars finally get over the hump and win the PAC-12 North?

The Cougars need to reload at QB yet AGAIN with the departure of excellent porn-stached QB Gardner Minshew who threw for 4,779 yards (!) (#2 FBS) and 38 TDs a season ago. Mike Leach just keeps finding productive signal callers that can jump right in and run the offense with ruthless efficiency. This year the role of NEW AMAZING QB goes to senior Gage Gubrud who transferred over from Eastern Washington where he was phenomenal (almost 10,000 passing yards in just 29 starts). Gubrud will be throwing to one of the best WR groups in the conference and the top-three in receptions all return for battle.

The Cougars just run enough to keep things honest but lose last season’s leading rusher James Williams. The BIG news about that loss is that Williams bagged an amazing 83 (!) receptions a season ago which led all RBs and he was tied for 17th in the entire FBS. In fact, #2 on the RB receptions list only hauled in 53 passes. Who was ranked #2? Teammate RB Max Borghi who returns to the fold for the Cougars this year. Depth at RB is a question mark, however. The offensive line had a legendary season in terms of pass protection last year. They allowed a mere 13 sacks in close to 700 (!) pass attempts. Yes, there were a lot of short passes but that is still impressive. Four starters return to the OL unit but they lose star LT Andre Dillard (#1 NFL DC – Eagles).

Washington St will have a potent offense once again and we expect a similar level of production as the prior year (37.5 PPG).

“Offense” is what people think of when they ponder the merits of Washington St football. That isn’t necessarily wrong BUT consider that the Cougars have had a really good defense for the past four seasons. They have decreased their PPG allowed in every campaign since the 2014 (!) season (38.6, 27.7, 26.4, 25.8, 23.3). They also led the PAC-12 in sacks last season (38) and not many people would have guessed that, yo.

Things look pretty good on this side of the ball once again with six returning starters and eight of their top-12 tacklers back in the fold. The bad news is that they lose their leader and tackling machine LB Peyton Pelluer. LB Jahad Woods is a fine player and the DL will be buoyed by the addition of NT Lamonte McDougle who transferred from West Virginia. The secondary loses their starting CB combo which is not a positive but they do boast one of the best safeties in the conference in senior Jalen Thompson who led the squad with 8 PBU a season ago.

The defense might be down a slight notch, but much like the Oregon defense, this stop unit looks good enough to support a charge at the division crown.

Overall – There is good news and bad news. They should be able to get off to a 4-0 start with home dates vs New Mexico St, N Colorado, and UCLA. They take on the Houston Cougars at NRG Stadium in week 3. Bad news? They have three super-tough conference road tests (Utah, Oregon, Washington).

Washington St has scored a combined 22 (!) points in their last two battles with the Golden Bears. They got pasted in Berkeley back in 2017 by a score of 37-3.

Lean to the over at that number. The road docket is tough but there is no reason to think that a team this talented can’t get to 9 wins.

The Cougars play home games on campus at Martin Stadium which opened in 1972. The site actually dates back to 1892 when it was called Soldier Field.

With a 28-26 win over #24 Iowa State in the Alamo Bowl, Washington State won 11 games for the first time in school history and finished the season 11-2.

The Cougars have a really balanced squad and a realistic shot of going into the Apple Cup with a shot to take down the PAC-12 North. Then again, the Washington Huskies appear to be their KRYPTONITE. And Oregon is also gonna have something to say about the proceedings.

We have slightly positive vibes about the ATS prospects for the Cougars. DEGENERATE NATION is on to these guys by now BUT they might still slide under the radar when play the tougher teams on their schedule. Keep in mind that Washington St is 56% vs Vegas during the seven-year Mike Leach reign and they are a very impressive 18-8 as road dogs over that time horizon. Go Cougs!